IHG Rewards Club confirmed on Tuesday what I thought to be the most likeliest PointBreaks release time this time around. 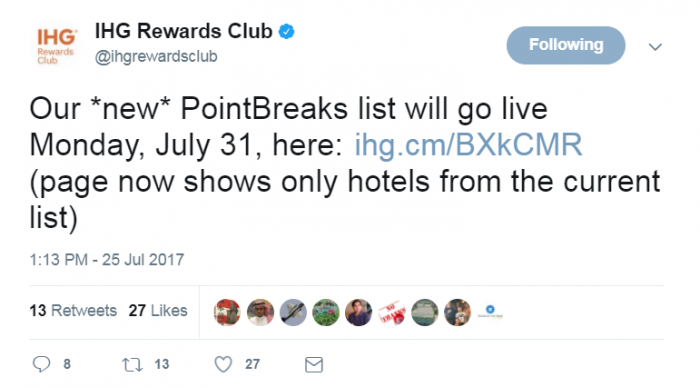 The PointBreaks are going live on Monday (July 31, 2017) and only exact release time is still unclear. Usually this happens around 10AM ET, although has happened few times in the afternoon as well.

Here’s what I wrote back on Saturday:

The last round of PointBreaks is valid until July 31, 2017

– We received preview from IHG on April 20 (Thursday)

I would assume that we receive the Preview on Thursday (July 27), full list on Friday (July 28) and the booking will go live on Monday (July 31st).

Note that there have been occasional changes to this “release schedule”. We will monitor the situation and will have posts up as soon as we receive information from IHG.

I believe that the schedule that I have up still holds. I would assume that we get the usual teaser tomorrow (on Thursday) and the full preview list on Friday.