Etihad Airways, the smallest of the ME3, today released its 2016 financial results showing $1.87 billion loss for the year.

The airline wrote down $1.06 billion on value of aircraft and further $808 million charge due to Etihad’s equity alliance partners (Alitalita and Airberlin).

Here’s the press release from Etihad:

Abu Dhabi, UNITED ARAB EMIRATES – Etihad Airways today announced its 2016 financial results, recording a net loss of US$ 1.87 billion on US$ 8.36 billion in revenues as one-off impairment charges and fuel hedging losses weighed against a solid performance of the core airline.

The core airline business achieved steady passenger revenues of US$ 4.9 billion and 79% load factors while carrying a record 18.5 million passengers. Available seat kilometres (ASKs) increased by 9% to 113.9 billion. Yields fell 8% amid market capacity pressures and the tough global economic climate, but this was partially offset by an 11% reduction in unit costs.

Total impairments of US$ 1.9 billion included a US$ 1.06 billion charge on aircraft, reflecting lower market values and the early phase out of certain aircraft types. There was also a US$ 808 million charge on certain assets and financial exposures to equity partners, mainly related to Alitalia and airberlin.

Legacy fuel hedging contracts also had a negative bearing on performance in 2016, though this exposure is expected to have less of a financial impact during 2017.

A slowdown in the cargo market put increased pressure on cargo revenues and yields, and the airline saw a slight improvement in freight carried at 595,519 tonnes for the 12-month period.

H.E. Mohamed Mubarak Fadhel Al Mazrouei, Chairman of the Board of the Etihad Aviation Group, said: “A culmination of factors contributed to the disappointing results for 2016. The Board and executive team have been working since last year to address the issues and challenges through a comprehensive strategic review aimed at driving improved performance across the group, which includes a full review of our airline equity partnership strategy.

“The record passenger numbers in 2016 affirm Etihad’s role as a significant economic enabler for Abu Dhabi, and our airline business continues to support Abu Dhabi’s vision to develop tourism, grow commerce and strengthen links to key regional and international markets.”

Ray Gammell, Interim Group Chief Executive Officer, explained: “We are focused on maintaining the solid performance of our core airline business – operationally and financially – even amid difficult market headwinds. At the same time, we continue to implement changes across the group as part of the comprehensive strategic review, with a focus on improving revenues and reducing costs.

“During 2016, the airline commenced a Right Size & Shape programme that generated total overhead savings of 4% through headcount reductions and other measures by the end of the year, even as capacity and total passenger number increased.

“This year is just as challenging for the global aviation industry and the ever-evolving competitive environment is likely to impact overall performance in 2017. However, our airline business remains strong and class-leading, and as an aviation group, we are in a stronger position.”

“Our answer to these challenges is innovation and reinvention, and this gives Etihad Airways a competitive edge as we seek to leverage opportunities offered to us by a changing environment.

“Operationally, we performed well in 2016. We maintained load factor levels even as we increased capacity. Yields were under pressure in all cabins, with Business Class impacted particularly as corporate travel policies continued to encourage flyers to downgrade to Economy.

“Our fuel hedging positions, which helped manage fuel spend during the oil price boom, yet significantly impacted our cost base last year, will taper during 2017. We are also seeing promising improvements in the contribution made by our ancillary revenue strategies, and we expect those to offset some of the yield declines.” 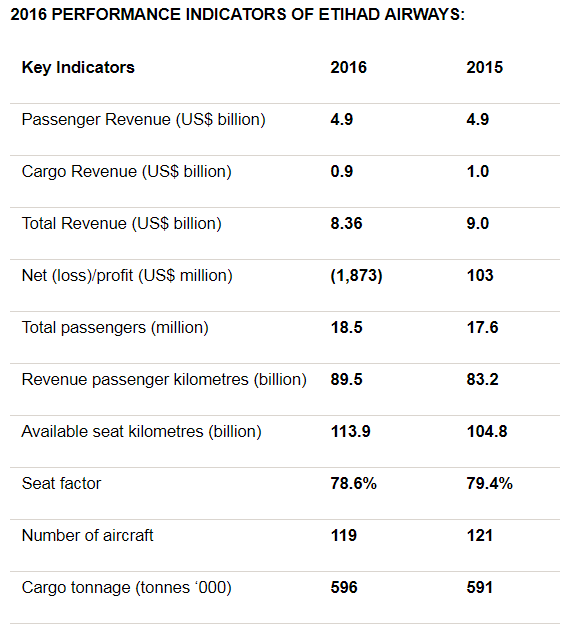 The airline took a loss on fuel hedges too and those will affect its 2017 performance as well. The airline basically hedged fuel at a higher price than is the current going rate.

These losses that the airline posted are “financial” and not operational. Seems like the airline would have posted modest operational profit for the year had they don’t decided to clean the table.

The previous CEO just left and airline likely wanted to write drown the values so that they wouldn’t need to drag the financial performance in the coming years. Better one big loss than number of smaller ones for extended period of time. This is the way companies tend to operate.

It doesn’t look like the Etihad Equity Alliance was the right approach.

Airfare of the Day [Business Class] ETIHAD AIRWAYS Seoul to London from $1,788