Last week, I wrote a review of Finnair’s transatlantic business class service on my previous trip to Europe. The weekend before last I took another trip “across the pond” and flew two of the other major oneworld transatlantic carriers.

Having never flown Iberia on a longhaul flight before, I figured I’d give them a try, so I flew out from LA to Madrid on Iberia, and back to the US on BA from London to Baltimore.  I have to say the experience was quite different between the two, and I was surprised at the lack of consistency between two of the airlines that operate a joint venture (along with AA and Finnair) on transatlantic routes.

The Iberia flight I took was an overnight flight operated by an Airbus 330-200 which was scheduled to leave LAX at 6:20pm local time and arrive in Madrid 2:20pm the following day.  The BA flight was an operated by a Boeing 787-8 Dreamliner and scheduled to leave London (LHR) at 3:40pm and arrive BWI 6:35pm. So while some of the differences are inherently due to the direction and time of day of the flights, there was a very stark contrast between the two carriers in almost all aspects of the flight – seat, bedding, entertainment, food, service, etc.

Although on paper, the Iberia seat and layout seem superior to BA (1-2-1 staggered layout on Iberia vs the 2-3-2 layout on BA and slightly more width and pitch on Iberia than BA), the seat on Iberia just wasn’t as comfortable as the BA seat. Maybe it was the padding or the way each reclined, but I felt more comfortable in the BA seat (on the right in the image below):

Although most seats in BA’s 2-3-2 seating configuration are ones where you either have to climb over someone or potentially be climbed over to get in and out of your seat, there are some “gems” in the bunch. On the 787, the last row in business class (row 7) has 2 rear-facing window seats that are also aisle access (you don’t ever have to climb over anyone and vice versa). In most BA seating configurations, the last row of each section (and before some exit rows) are similar. This pic was taken from a previous BA flight (777 I believe) but you can see a bit more clearly the space to get out in back of the other forward-facing seat. 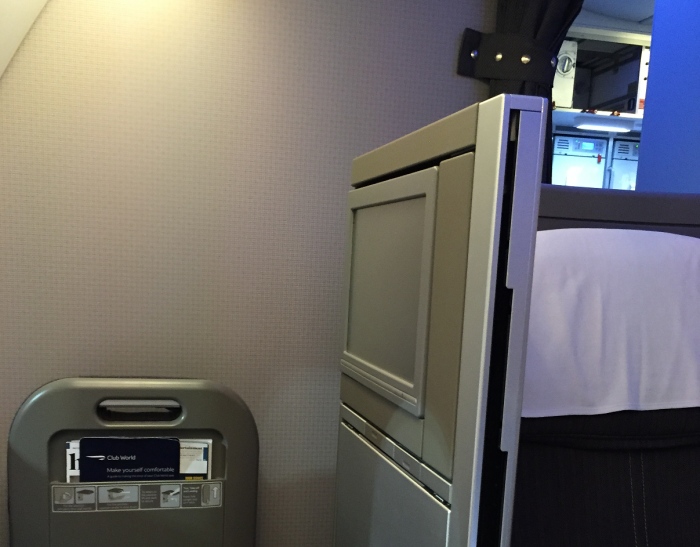 Although the Iberia blanket was colorful and stylish (in about the same way the 1970s were), it was on the thin side and not very comfortable. The pillows on Iberia were about as thick as a T-shirt and just about as comfortable to lay on. Although I didn’t get a pic of the BA blanket, you can see the pillow in the seat picture above is close to a normal pillow you might find on a hotel bed.

I was a bit disappointed when I was offered just water or orange juice for my pre-departure beverage on the Iberia flight.  I asked if they had champagne or sparkling wine and was told by the flight attendant “we’re not allowed to serve any alcohol until after takeoff”. Funny that I’ve been served champagne or sparkling wine on at least a half dozen other airlines I’ve flown out of LAX the last few years.  Evidently that’s an Iberia cost-cutting rule rather than a local law. On my BA return flight, I was able to enjoy my nice pre-departure glass of bubbles! 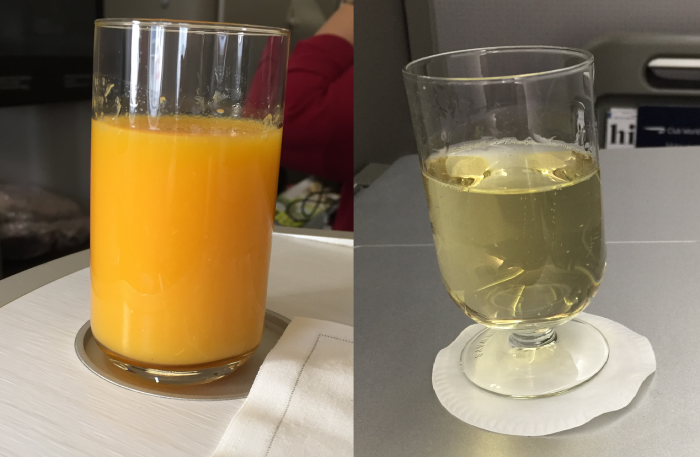 This is the part that really disappointed me the most on Iberia.  I like Spanish food a lot, and I was looking forward to a nice meal… maybe some tapas, paella, etc.?  But the food on Iberia really was a disappointment.  Below you can see a pic of how the tray came out initially (including beef broth poured out of a thermos by the flight attendant) as well as the main course (beef filet and shrimp). I included my finger in the second pic so you can see how small the piece of meat is in comparison. And even though the main course was swimming in liquid, it was one of the driest pieces of meat I’d ever tasted. 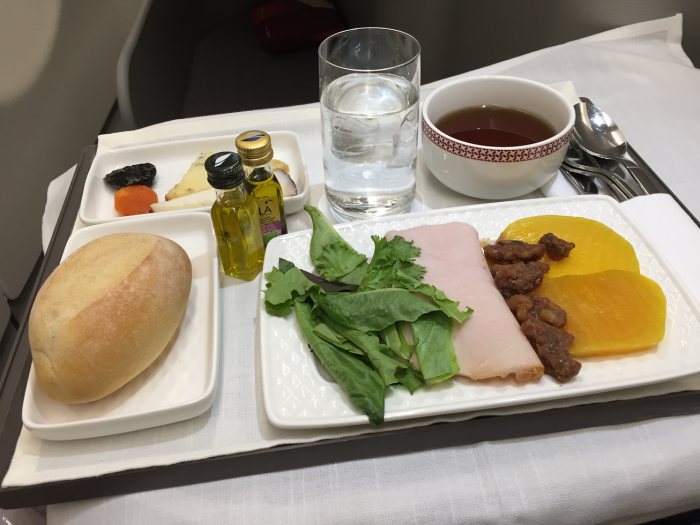 When you compare the images from Iberia above with the British Airways main meal service below, you can see a world of difference. The presentation is so much better and the food tasted so much fresher than the food on Iberia (I chose the Chicken Tikka Masala for my main course on BA): 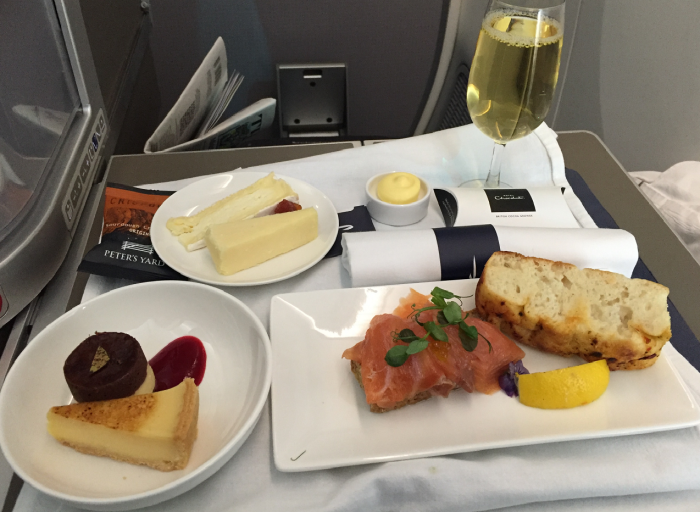 The second meal service on Iberia was breakfast served about an hour before landing (omelette with pork slices and hash browns); on BA due to the timing of the flight this was just a light tea and snack service (sandwich slices). I have to say Iberia rebounded a bit with this meal; it was definitely better than the dinner service, but about what you’d expect for breakfast in business class on a Europe-bound transatlantic flight.  The meat was slightly dry but edible. The BA meal wasn’t a full cooked one so it’s difficult to compare the two, but you can see for yourself in the pics below:

Although this should have been a clear win for Iberia as BA is just starting to roll out wifi on their planes about a decade or so late, the wifi didn’t work at all when I tried it (shortly after dinner when we were still flying over North America).  In business class, flight attendants hand out vouchers to give you 30 min of free wifi (up to 50 MB), but when I tried to log in I didn’t have any luck:

I did check again about an hour before landing and it was working, but the speed was very slow so I decided to just give up and reconnect at the airport.

As for the service… I felt the service on Iberia was far less attentive than BA.  I know this was an overnight flight and most people sleep after dinner but usually flight attendants will make a couple of passes through the cabin throughout the night to see if anyone needs anything else. To attest to the level of service on this flight, I asked for a small can of coke shortly after dinner service was over, drank it before I went to sleep, and woke up 4-5 hours later to find my empty glass and can still sitting on the armrest of my seat.

Although both planes featured touch screen entertainment systems with decent-sized screens, there is considerably more content to choose from on BA than Iberia.  Iberia boasts “more than 65 films and at least 105 total programming options” vs BA’s claim of “over 130 films and more than 400 programming options”. 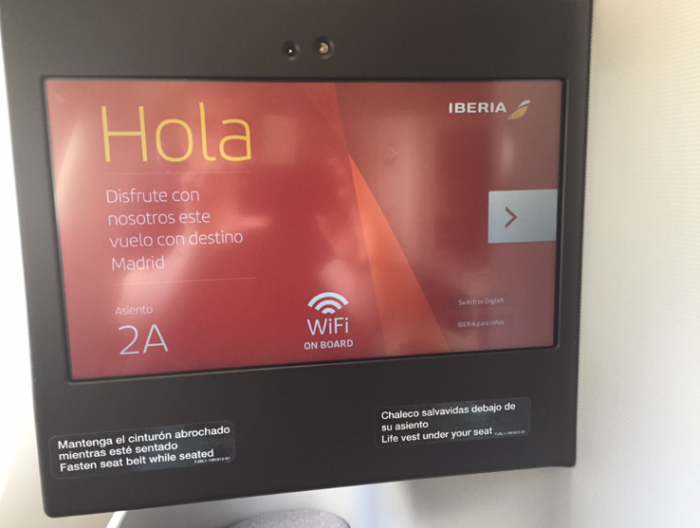 Although the code-sharing and profit sharing between these transatlantic joint venture airline partners is supposed to standardize the experience and lessen the importance of the individual operating airline (one can book any combination of these carriers on a single ticket marketed by any one of these airlines), the actual experience does differ quite a bit depending on which operating carrier you choose.

I’d have to guess that Iberia isn’t investing as much in their business class product as the other airlines in the joint venture, and that’s unfair to the other carriers if they’re splitting profits proportionally. As much as BA has gotten bad press in the last year or so with service cuts and other cost-cutting measures, aside from their archaic seating configuration, they do offer a solid and relatively consistent on-board product in business class.