Every now and then you come across a very good deal for flights and so it happened it our Fabulous Fridays topic this week when I discovered that Thai Airways now flies with a Boeing 747 to Bali again.

As I already knew from searching the fares that Thai doesn’t sell First Class on this route I was wondering what would happen with the First Class cabin on this 747 and if it might be possible to secure a seat there.

Thai Airways often uses their long haul equipment on regional and even domestic routes and many times it’s possible to request a seat in the First Class cabin at the time of check-in.

In the case of TG431/TG432 however it’s possible to select your First Class seat already in advance when completing your booking which I found out when doing a test booking on Thai Airways website and within the booking process reserving a seat.

When you select a Business Class ticket it opens up all seats including those First Class seats in the nose of the 747.

The flight from Bangkok to Denpasar is 4:20h which is quite long for a regional flight and given that the refurbished First Class seat on the 747 All Series Passenger is very comfortable this might be one of the best routes out there to enjoy it free of charge.

For the flight from Bangkok to Bali I decided to redeem 25,000 United Mileage Plus miles. You could also buy the ticket for 25,800 THB (one way) which is roughly US$780 so I decided to redeem a few miles for this trip. I was then able to select the seat 2A under Manage My Booking on the Thai Airways website.

Here are some impressions from inside the cabin: 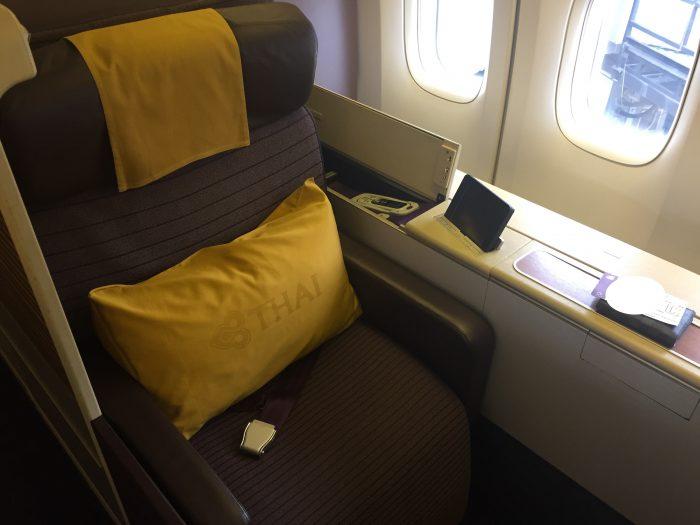 View to the front (see Seat 1K to the right) 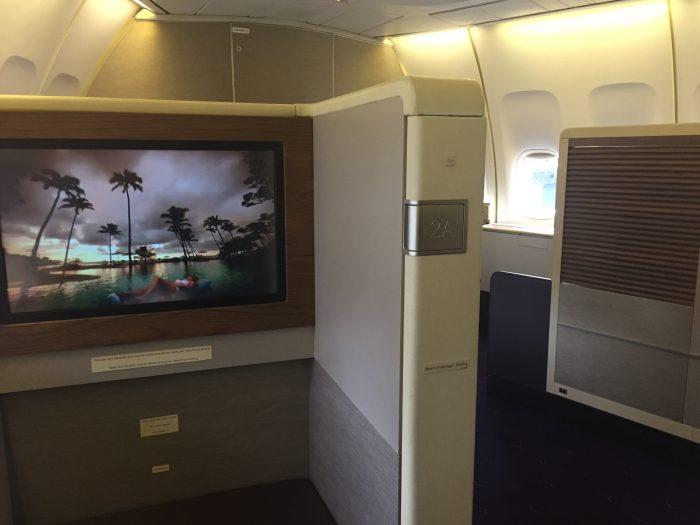 The champagne served on this flight was nice (Veuve Cliqout) same as on my trip to Beijing in April. 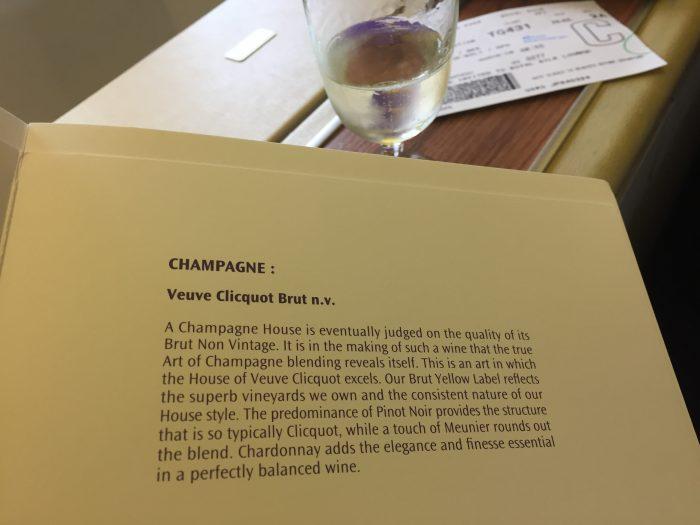 The food selection has three options which is pretty generous for Business Class. Unfortunately they all didn’t sound very enticing and the chicken thigh I chose was greasy and not in the least appetizing. The dessert was nice and the only thing I ate off the entire serving. 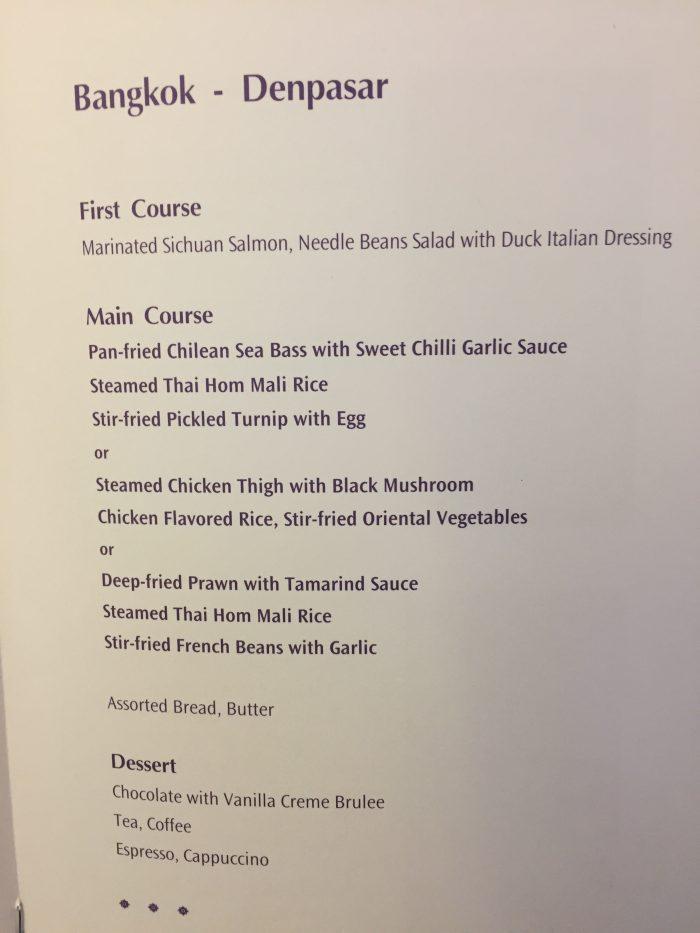 Unfortunately as I wrote a few weeks ago (see here) the pre-flight menu choices for Business Class have been discontinued which is a huge bummer as Thai Airways on board meals have always been known to be quite horrible in Business Class. In fact it’s pretty much the same as in Economy Class.

The service on board was very good and I felt the crew was treating passengers in this cabin better than during regular Business Class service, especially noticeable in the way they spoke with the British lady in seat 1K. They also had senior crew to serve the front cabin just as you usually see it during regular First Class flights and even laid out the newspapers on the middle cabinet.

Thai Airways used to sell/operate actual First Class out of Bali every now and then but the only difference would be the First Class ground service in Bangkok (Lounge and full hour Spa) as well as better food and Dom Perignon Champagne on board. Not sure if these things would warrant the difference in price as I already considered the service top notch on this flight.

I haven’t booked my return flight from Bali yet, maybe I will pick this TG flight again and then likely purchase it as a regular ticket from Denpasar as it’s a lot cheaper than ex Bangkok (only 7 Mio. IDR which is approximately US$520).

What you have to keep in mind here is that you still hold a Business Class ticket so if Thai decides to swap the aircraft last minute against another one that doesn’t have the First Class cabin you don’t have any recourse other than to accept that. And Thai Airways is notorious for swapping planes.

That was the other reason why I chose to buy this ticket with miles because in case they done this I’d have just cancelled the ticket and bought a cheap Economy Class one way. I really don’t like to waste miles for Thai Airways Business Class in the regular cabin to be honest, especially not the old seats. I have no problem flying Economy if the price is right and with Star Alliance Gold I’d still have decent benefits.

Thai Airways Will Operate More “Special Flights” TO Europe & Within Asia Until December 30, 2020