China announced this week that the existing 3 Day (72 Hour) Visa Free Transit Program for the Airports Beijing & Tianjin will be upped to 6 Days (144 hours) by the end of the year. 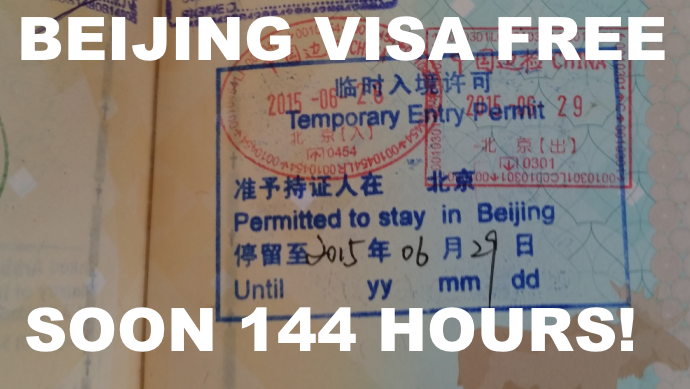 A vice mayor of Beijing made the surprise announcement this week while promoting economic activities in the region and to ‘further open up the capitals service industry’.

As of right now, visitors to Beijing who transit into a third country within 72 hours are able to stay visa free in the vicinity of the city where they entered.

Travelers entering China under this scheme are not allowed to leave the greater Beijing area which makes certain excursions such as to the Great Wall a bit complicated even though there are some areas that I guess can be counted towards Beijing, a city which has a massive range.

You can read more about the announcement from ECNS China (see here).

The cities of Beijing and Tianjin, along with Hebei province, will allow 144-hour visa-free entry for nationals from certain countries and regions by the end of 2017, a vice-mayor of Beijing said on Thursday.

The move is part of the nation’s long-term commitment to modernize and upgrade its service industry.

Cheng Hong, a vice-mayor of Beijing, said the policy will extend the visa-free time for travelers from some countries who want to visit the three areas. Currently, the maximum stay in Beijing and Tianjin is 72 hours.

The policy adjustment will facilitate “the free circulation of resources” in the Beijing-Tianjin-Hebei region, Cheng said.

In 2016, Shanghai, joined by Jiangsu and Zhejiang provinces, took the lead in permitting 144-hour visa-free entry, which gave foreign visitors from 51 countries and regions more than enough time to travel or attend conferences in the region.

Cheng made the remarks at a news conference on a comprehensive pilot plan, which the State Council promulgated in late July, to further open up the capital’s service industry.

I really love these 72 hour (now 144 hr) visa free options and use it several times per year for my trips to China. Let’s hope that it will work just as efficient as last time when Shanghai was the first city to introduce the program and Beijing among other cities quickly followed suit with the 72 hour regulation which is now being adjusted to the 144 hour one that has been announced in late 2015 (we wrote about it here).

Keep in mind, to be eligible you have to TRANSIT to a third country and can not go back to your country of origin. You are also NOT allowed to leave the city you arrive in. Here is an example:

This regulation means that it can pay off to use stopover options when booking mileage tickets as well as looking out for tickets that allow free stopovers in Beijing, Shanghai etc (obviously mostly those of local Chinese Airlines of which I find Air China and Hainan Airlines to be the best).

John wrote about how to use visa free facility here and I also added an updated experience I had in April where the customs officer required some people to fill out a pro forma application form for an on the spot background check (see here). That form was still stuck to the booth three weeks ago so it still applies and apparently is applied randomly by the officers.

This is an extremely valuable improvement that for sure will be very popular. 3 days is a bit short but 6 days are exactly the right time.

While the program was designed to attract visitors (tourists) it is also used by many business travelers who can’t get a China Visa on a short notice and those who don’t want to go through the trouble of getting one just for a brief few days stay. I recently paid 110 EUR for a double entry visa issued in Germany (good for 2x 30 days however which I will use for long stays and for trips that require domestic travel).