Yet another incident surfaced from Indonesia’s Jakarta Airport where government officials were once again involved in abusive behavior against airport staff, this time in the beating of a security officer. 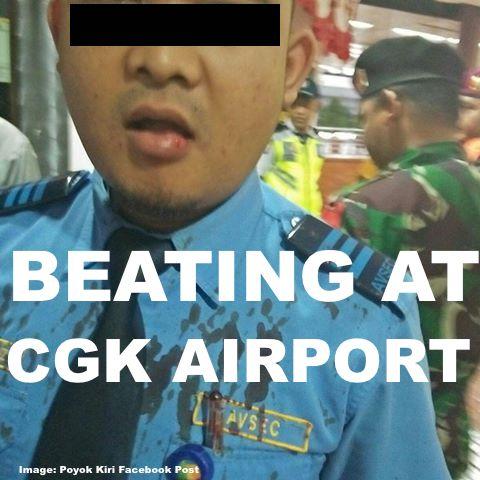 A military (navy) officer who accompanied family to the airport was apparently upset with security staff who as per his impression caused his family to miss their flight and then beat the man until blood was flowing.

Indonesia has seen several such cases in recent months where officials of various capacity have been abusing, attacking or even injuring airport staff as they didn’t receive the ‘royal treatment’ they were expecting.

The incident took place early Sunday morning and as expected pictures of the scene have once again found their way to social media quickly, posted among others to a local Facebook Group (access here).

When the news outlet Kompas (see here) contacted the airports press department the spokesman confirmed the initial version of the events.

The incident took place on Sunday morning at about 4am. The suspect, alleged to be a navy officer, arrived at the airport to accompany his family, who were set to fly to Jayapura.

He then wanted to go through the entrance security so that he could help his family members check in. He was initially denied entry to the check-in area as at Jakarta Airport only passengers are permitted in the terminal building. He asked for a supervisor but none was available. Eventually, the navy officer was allowed through by the security guard.

When reaching the check-in desk, he was told that his family was already too late to board their fligh and that changing their flight to the next departure would cost them a change fee of 9 million IDR (~ US$700).

According to the Facebook post, the officer then went back to the security guard who held him up earlier at the gates and complained to him that his actions made his family to miss the flight.

The security guard answered him that this is his personal problem.

That answer seemed to set off the navy officer who then attacked the guard, punching him until his lips were bleeding (as evident by the picture posted).

When asked by the media about the story last night, Soekarno-Hatta Airport officials confirmed that a TNI (Indonesian Military) member had attacked one of their security guards in a manner similar to the viral story, but did not disclose any exact information confirming or denying the details in the post.

Soekarno-Hatta Airport communications manager Dewandono Prasetyo Nugroho told the news outlet when contacted that he understood the incident took place as described and that the airport would investigate the matter further.

They would have likely made their flight without a problem but the Navy guy had to play Mr. Bigshot and probably waste upward of half an hour to argue with the security staff. For what, to stand next to them during check-in?

As this is not an isolated case but the third incident within just one month that took place at the busy airport it shows that something is inherently in the society when there is a prevailing sense that members of the upper class, politicians and even military can exempt themselves from all rules and waltz right through.

It’s also alarming that anyone can just avoid basic airport security at Jakarta, a city that has seen it’s fair share of bombings throughout the times including at various international hotels. The country also has a prevailing terrorism problem (well to be fair, which country doesnt?).

In July, a military doctor, slapped an airport security officer at another security checkpoint in Jakarta CGK Airport because the latter was supposedly being impolite towards him. Another incident made public showed the wife of a police general who was filmed slapping a security officer at Manado Airport.

From what is happening around Indonesia it seems that instead of protecting the public and keeping order in society, members of their police and armed forces as well as their family see their profession as royal status that allowed them to ignore any prevailing laws and punish others around them at will, even with force. The corruption being a totally different topic altogether.

If this happens in the public eye I don’t want to know how they treat their actual employees at home such as maids and other staff as well as the subordinates at work. As an Indonesian citizen I’d be concerned about the direction the country is going to, especially because the airport authority in all cases instructed the staff to train in deescalation methods rather than denouncing the people responsible for the attacks.