As so often with extremely low priced premium fares that are almost too cheap to be believed, news about these ‘Special Deals’ make their way like a wildfire through the internet including social media groups and travel blogs. 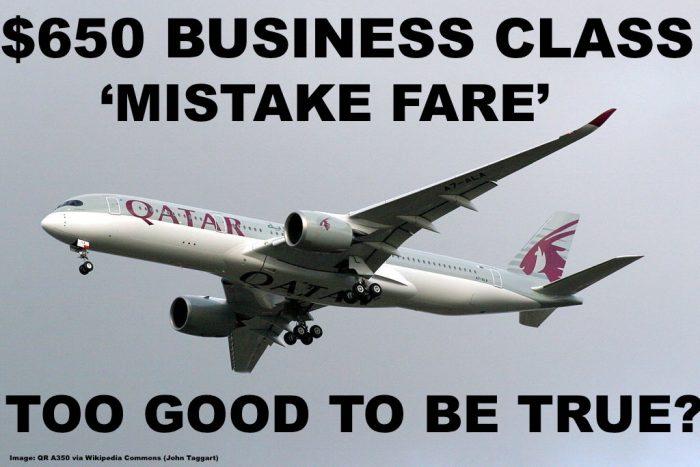 Even though we at LoyaltyLobby have had a longstanding policy of not covering the fares per se we would like to briefly shine some light on this specific fare and what mistakes not to make when booking them.

Premium airfare priced so low that it’s almost too good to be true are usually the result of an error on behalf of the airline which filed the fare such as entering a wrong base fare such as 1,00 instead of 1000,00 (or even higher in some cases). Another option is the sudden devaluation of the currency in which the fare is filed as it was the case in Myanmar a few years back and in Egypt late 2016.

Over the years we at LoyaltyLobby have flown a good number of such deals including multiple Korean Air First Class tickets from Yangon to North America at US$350 a piece.

Why don’t we cover these fares on LoyaltyLobby while so many other travel blogs do?

Readers have indeed asked us that question here and there over the years.

We have made an editorial decision not to cover them because most of the fares aren’t being honored by the airlines these days. People are booking them and 90% of the fares are being cancelled as the airlines have figured out they can get away with it. In many cases the customers then have to run after their money such as in John’s case with the Alitalia ticket Florence-Duesseldorf (see his latest experience here) where I personally know people who still haven’t gotten their several thousand US$ back from Alitalia.

In short: These fares often create a headache for those who booked it and there are already enough outlets that cover these mistakes or ‘Special Deals’ how I like to call them.

While I can make the decision for myself as someone who has been in the game for a good 15 years since the early days of platforms such as Flyertalk, we don’t want to entice unsuspecting people with big headlines booking these things and then running into problems.

Back to the Qatar Airways Fare.

For a duration of maybe 12 hours Qatar Airways has been selling Premium Class fares in Business Class from their Vietnam gateways Ho Chi Minh City and Saigon. They were available to Europe, Africa and the Americas for prices between US$560-$680 per round trip ticket.

I managed to book one from Hanoi to Frankfurt this months and paid for it immediately when I was able to price it at the dates I wanted. The confirmation and ticket numbers were available immediately.

As can be seen on my example this time around the fare is displayed as USD 0.00.

Qatar Airways also has an option on their website to hold the fare as a ‘price guarantee’ for a certain period of time. You can even pay to hold it up to 72hours. Some people did that and I want to highlight why in the case of such a ‘deal’ that is the wrong thing to do.

These price guarantees are for legitimate fares, not mistakes or fares the airline later claims as such. If you see a great deal at such a price BOOK IT if you can afford it and you can foresee your schedule a little. Only a properly issued ticket has any chance of being honored in the long run after the airline finds out about their mistake.

In that present case with Qatar Airways, the airline has cancelled all reservations that were on hold and the people who held them have no recourse to get them back. While there were reports of some tickets that have been issued being initially cancelled, the news now are that Qatar has reinstated these bookings and it appears those who got in on the deal will be good to fly.

Qatar Airways has indeed honored issued tickets for such low prices in the past are (hard to believe but true) are one of the more honest airlines in this regard. There were a good number of errors Qatar did over the years both in Business Class an Full Fare (Y) Economy Class. Unfortunately there was also the instance where they refused to honor another fare that allowed to fly from Phuket to Saigon via Doha. In that case too, many people were unable to ever recover their money.

These days there are plenty legitimate fares out there that allow to travel the world for a reasonable price. We decided instead of propagating potentially problematic deals to publish a ‘Fare of the Day’ which revolves from region to region so that at some point everybody might find something interesting.

10-15 years ago people who got to know about these erroneous fares were far and in between. If there was such a case the airline sold a couple hundred tickets and that was it. They usually swallowed the loss as it was marginal in the big picture. Today we have the internet to distribute these news worldwide within minutes and you’re talking about thousands of bookings which might very well block an airlines premium inventory for months. As the carriers have figured out they can get away with it to just cancel them this is exactly what happens most of the time.

In any case, should you ever come across such a deal keep in mind that only purchasing it right away will put you in a safe spot. Holds of any sort are worthless. Some OTA’s such as Orbitz and Expedia (US site) will also offer you a 24h free cancellation policy.