Back in late April, I qualified for the lifetime SPG Platinum status after 10 years of Platinum status with the program and more than 500 nights. I wrote about this at the time (access here).

SPG sends lifetime Platinum members supposedly a nice package with metal card and a map that shows all the destinations that one has been to. The reason why I use word “supposedly” is that Starwood has now unsuccessfully sent it to my address in Finland. Whether they have actually dispatched it or not, who knows.

You can access Starwood’s page for Lifetime status here.

I inquired via SPG chat what happened to the lifetime kit. The person at the other end basically ended the chat before even answering the question. I gave him/her very bad marks on the after chat survey and requested supervisor to review the convo.

Other members that had qualified for the lifetime status in late April/early May had received their kits in early June. I inquired the status of my kit in early July. They got back to me that the delivery would be in the 10 to 12 weeks range.

When I contacted SPG again regarding this, I got push back from the same person that I shouldn’t be contacting them before July 31st that would be 12 weeks from the date I supposedly requested the kit. 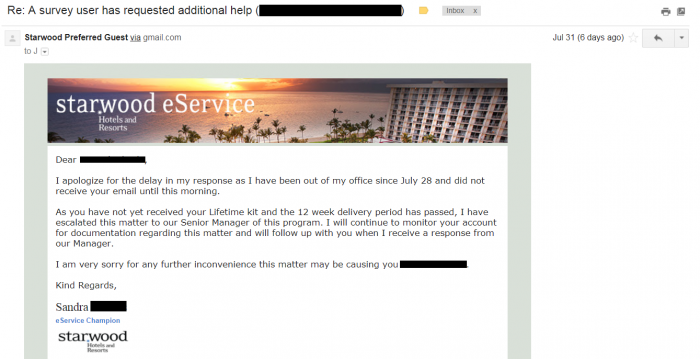 The time was up and then the person decided that it was time to contact the person handling these kits. 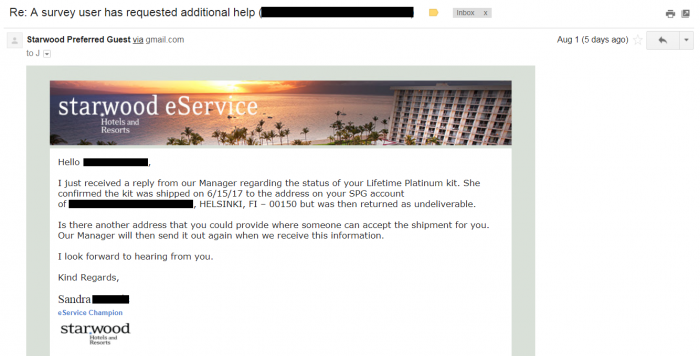 Surprise surprise! The kit was supposedly sent to the address in Finland on June 15 and returned. Why didn’t she contact the “supervisor” when I originally raised the issue on early July? 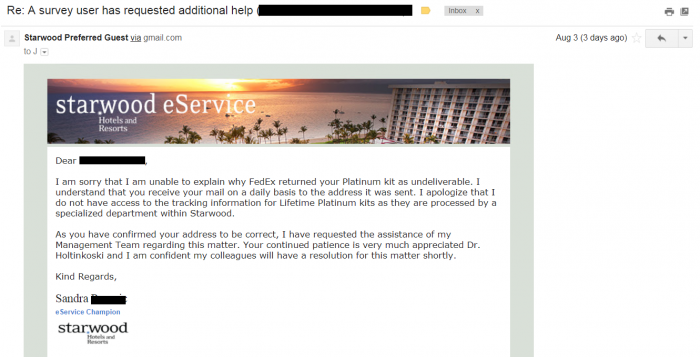 Other companies have no issue delivering mail and packages to my address in Helsinki….

Then someone from Marriott in Ireland emailed me on Friday asking an alternate address that I emailed.

What an ordeal to get the lifetime kit out from SPG! Shouldn’t have been that difficult for them to drop me an email with the FedEx tracking info IF they actually ship the kit out back in mid-June as they claim to have done.

The featured photo above was actually emailed to me by a longtime reader that doesn’t like the fact that Marriott places all these fictional readings to guest rooms without asking guest approval first.