A reader contacted us asking if we had any experience how long it takes for the IHG Platinum Status perk of the Chase (U.S.) issued credit card to be activated on his rewards account after card approval.

While we had no direct experience with the card I decided to just apply for it as I was playing with the thought of it anyway and there was a decent sign up offer at the moment.

The IHG Rewards Club credit card which is issued in the U.S. by Chase Bank has been recommended to me multiple times by friends as it comes with permanent Platinum status as well as a free reward night every year at only US$49 annually.

Here is the question our reader Ralph had:

Hi, I’m about to head for a three week vacation and will be staying at several hotels that belong to the IHG chain. I tried to initiate a status match from my Hyatt Diamond but they declined saying the promotion ended. Now I’m trying to somehow get IHG Platinum before the end of August and the only viable option seems to me to get their credit card. Any ideas how long it will take for them to reflect the new status?

Indeed IHG stopped matching other programs status levels quite some time ago which is a bit of a bummer as it used to be very easy to get matched by them (probably too easy, hence the reason why they stopped it).

Banks can take their sweet time to correspond with the loyalty programs when it comes to the benefits that connect the credit card to the actual loyalty account, even though I found Chase to be quite good in terms of speed.

You can access their current offer on the Chase Credit Card website [LoyaltyLobby doesn’t provide links to these specific card offers right now but it’s obviously very easy to find on you own] where they currently offer 80,000 IHG Rewards points after spending US$1000 with the card within the first 3 months. 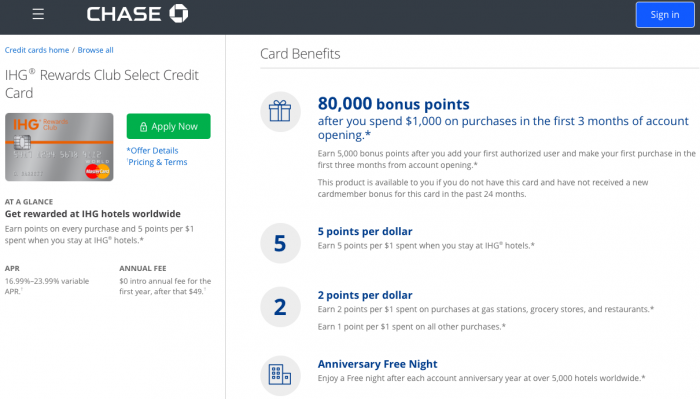 Additionally the card offers Platinum Status for the rewards account as long as the credit card membership remains active which is a very good deal. Combined with the annual free night and the 10% refund on all points redemptions it makes this card a real bargain even if you don’t use it for any purchases beyond the initial spend requirement at all.

Anyway, reminded by the reader to have another look at the card I decided to finally apply for it while I was on holiday in Bali last week. Card application and instant approval (with an insanely high credit limit for whatever reason) took place on July 31st.

The upgrade to Platinum showed up on my account just three days later which really surprised me:

Based on this experience the status will reflect very fast after card approval and he should be able to get everything in order in the time frame mentioned.

Another thing to mention is that the IHG Rewards Credit Card does not count into Chase’s self adopted limitation of any 5 Rewards Cards (all banks) within a 24 month period, otherwise known as the infamous  ‘5/24 Rule’  which would prevent a customer from receiving new rewards cards for the time being.

As mentioned the overall package of this IHG Rewards Credit Card is pretty good and the annual free night alone makes it more than worth the $49 fee. I’m glad I finally decided to apply for the card I had almost forgotten about and the current (as of August 2017) enhanced sign up bonus makes it even more attractive.

It’s relatively hard to obtain IHG Platinum from scratch nowadays and in my opinion too hard compared to the benefits offered for the status. I personally wouldn’t invest 40 IHG nights for their Platinum status but that all depends on someones travel profile. IHG has hotels pretty much anywhere and suitable for all budgets so they can certainly attract more customers than lets say Hyatt with a limited footprint and higher rates.