This weekend there have been media reports about horrible hour long lineups with thousands of people at Immigration Checkpoints in Thailand, especially the two Bangkok airports.

I also witnessed such a scene on Friday night when arriving at Bangkok’s main airport (BKK) around midnight where people had to start lining up in the concourse because the main immigration area was filled to capacity.

Long lines at Bangkok’s two airports during peak hours are nothing new but the current situation brings it to new levels and when you finally reach the counters just to see that less than half of them are actually staffed then you begin to wonder what in the world is wrong with the authorities in Thailand to not properly handle their immigration department.

While the situation at Bangkoks Main International Airport looked bad to me on Friday night I was stunned when I saw various Facebook posts and news reports about Don Mueang Airport the same evening.

The following day a news article in the Bangkok Post (see here) summarized it all.

Understaffed immigration clearance at Don Mueang airport resulted in a wait of more than four hours for hundreds of passengers — and an online complaint from a Thai man whose foreign wife was among them.

Piyabutr Saengkanokkul, a law lecturer at Thammasat University, shared images of packed queues for passport control at the airport on his Facebook page early Saturday.

He said his wife, a foreign national who had arrived from the award-winning Changi airport in Singapore, estimated that around 2,000 passengers were waiting in non-moving queues on Friday night. Two hours later he shared a similar image as the queues showed no sign of shortening.

After three hours of waiting, he asked airport officials what they were doing to solve the problem but they just acknowledged the issue. An immigration official told him that problems had arisen because several flights landed at the same time, but the airport did not coordinate with immigration in advance so there were insufficient immigration officers to deal with the crowds. …

Mr Piyabutr said his wife heard from several tourists who told her it was their worst experience with passport control. He said he wondered if any first-time visitors experiencing such problems would return to Thailand in the future.

Don Mueang Airport is being used by budget carriers such as Air Asia and Scoot that are known for offering big discounts and sometimes big headaches when it comes to delays. DMK airport is notorious for it’s insufficient facilities and inadequate staffing so passengers should think twice if it’s worth it using budget carriers for international flights from Bangkok Don Mueang (DMK).

That being said, BKK main airport wasn’t much better. When I arrived at midnight on Friday ex Kuala Lumpur the lineup reached all the way down into the concourse. 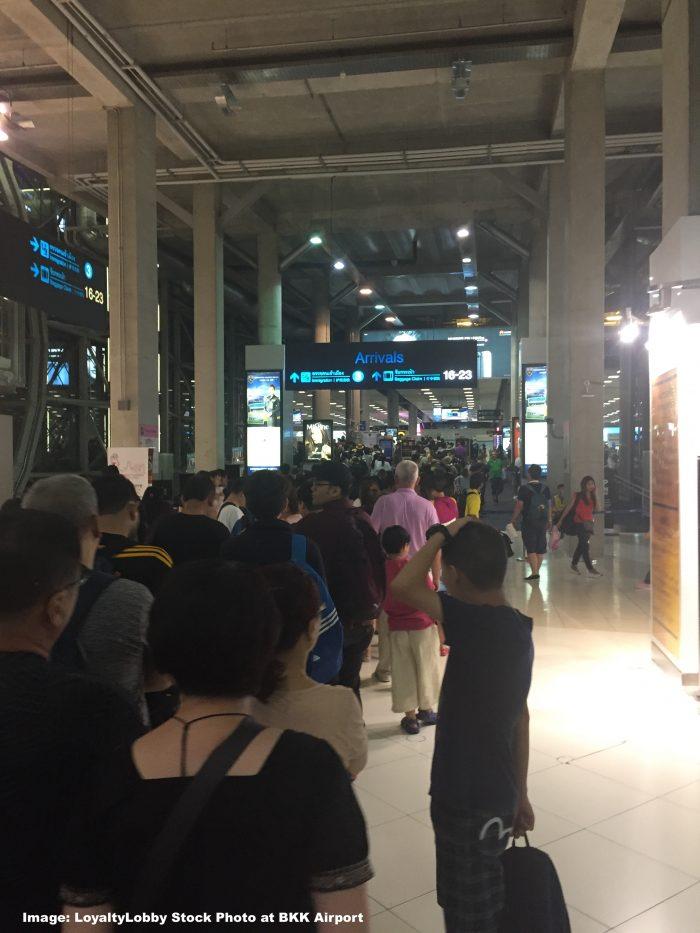 The excuse given by the immigration official at the airport that unforeseen circumstances such as ‘many flights landing at the same time’ created the issues at Don Mueang can easily proven to be a lie.

Searching the DMK airport international arrivals on flightstats.com (access here) it shows that only the Air Asia flight ex Hong Kong AK503 was one hour delayed on Friday night while the rest of the flights arrived within 30 minutes of their estimated arrival time. In fact the congestion was limited by another delayed Air Asia flight ex Guangzhou from 2:05am to 3:10am.

Fact is that the Thai Immigration Department notoriously understaffs their counters and it’s not a lack of airport coordination but a general case of incompetence on behalf of the authorities. The same happened simultaneously at two airports. Did the BKK airport also miss to inform the immigration authorities about high arrival numbers? I doubt it. These lineups are the same whenever I arrive there on the last KUL-BKK flight of the day.

I always make sure to fly in by Business Class during that time so to use the Premium Lane immigration section which only took me 7 minutes.

About a week ago I wrote about Thailand now starting to hassle travelers, selectively enforcing a minimum cash reserve tourists are supposed to carry (see our article here). It appears from the situation at the airports that the immigration department should get their priorities straightened out and provide adequate staffing at all times to avoid such a disaster.

We’re talking here about the main gateway into the country – one that always emphasizes on the importance of tourism – and then people arrive in such a mess, spending their night (which they paid for a hotel accommodation) in an immigration queue? Ridiculous and evident of complete incompetence on the side of Thai authorities.