Renowned premium carrier Singapore Airlines was long (in)famous for not giving out amenity kits in their Business Class and instead distribution necessities from a basket or in the washroom.

This week the airline sent out a survey to their KrisFlyer members asking their opinion about amenity kits after they started to distribute amenity kits as part of their 70 year anniversary.

While Suites and First Class customers always received an elaborate amenity kit including a full bottle of eau de toilette from their sponsor Ferragamo, Business Class always had to grab some items from the flight attendants who came around with a basket offering whats usually included in an amenity kit (ear plug, eye mask, socks) as loose items. In the bathrooms SIA always had a generous amount of shaving kits and toothbrushes.

As part of their 70th Anniversary SIA started to give out amenity kits to their fliers in Business- and Premium Economy Class as well.

Now customers received surveys, likely to figure out if these extras really make a difference to them. 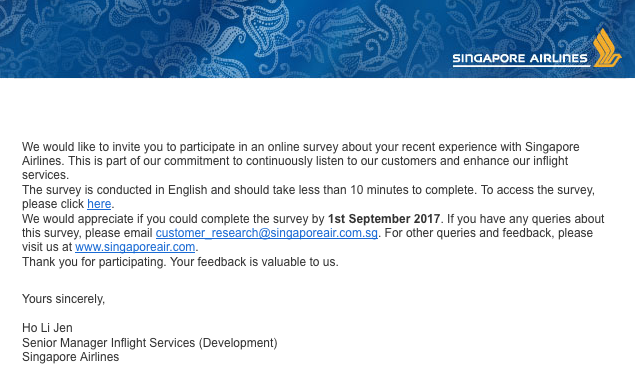 They list some items for the amenity kits that aren’t standard such as clothing refresher and hand sanitizer, asking how useful that would be for customers.

It’s clear that Singapore Airlines actively tries to receive the feedback from customers who have received Amenity Kits in the recent past as part of this temporary promotion and now wants to make a decision if introducing them as standard issue would influence the customers.

In my opinion it’s hard to say how conclusive this survey will be. For example I received it but haven’t flown SIA Business or Premium Economy for over a year. While I think it’s a nice amenity I find myself less excited about them in Business across the board except for EVA Airways where the kit is a Rimowa which is usually only available in First Class on other carriers.

Generally speaking it’s a huge waste given how many of them are produced to be given out to medium- and long haul customers every day. I often don’t even open them anymore.

Singapore Airlines recently reported a worrying trend that also has an impact on their financial results. They are losing market share and possibly also the edge which together with their stellar reputation helped them to maintain a steady customer base over the years while charging premium prices. But there is a price war going on and that is hurting Singapore Airlines and other carriers such as Cathay Pacific. Maybe SIA will try and add items such an amenity kit in Business Class to round up their product again against the competition.