Saudi Arabian Airlines (Saudia) has caused quite a stir when announcing on their website that they will now enforce a dress code that includes women being restricted from exposing arms and legs. 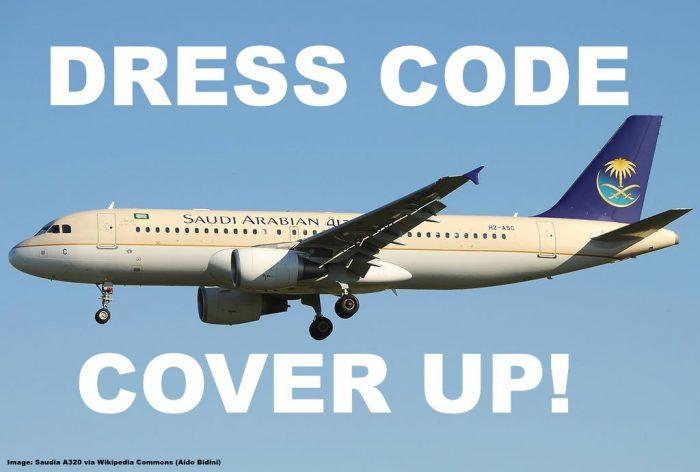 According to the airline these measures are put in place to “prevent discomfort or offense to other passengers” which also includes men from not being able to wear shorts.

Saudi Arabia isn’t known to be progressive but this most recent announcement by their national airline makes one wonder if they shouldn’t stop accepting international passengers altogether.

This is the original announcement that popped up on their website:

The post has since been taken down and now you’re only able to access the ‘Wellness and Travel’ section (see here).

… Wear comfortable clothes when you travel. Tight-fitting clothes may naturally cause some discomfort and it is advisable to wear loose-fitting clothes instead. This is why we offer, on certain flights in First Class, comfortable pajama suits that you can wear for utmost comfort. …

This wording is a wholesale departure from the initial post which in all honesty is way over the top. Do I like how certain people dress (juicy couture sweatpants, barefoot, muscle shirts…)? No, many times I don’t. But to restrict people (including children) from wearing shorts or even going so far and saying that women aren’t allowed to expose their arms is insane. So a female traveler isn’t allowed to wear a Polo Shirt when flying Saudia.

And ‘too thin’ or ‘too tight’ clothing? Who is going to judge what clothing is acceptable in the end?

I wonder if the disappearance of the original post signifies a retraction from Saudia after the international backlash since their policy adjustment made headlines all over the place.

Saudia is a SkyTeam Alliance member and such a policy doesn’t really reflect acceptance of international customs. Once this has been implemented what will be next, making passengers (especially women) wear clothing according to Saudi social standards?

Maybe Saudia should re-think their medieval mindset or consider to only transport their own citizens who are used to the Saudi regimes oppressive rules. Mind you we’re talking about completely normal and tasteful clothing items here that are going to be restricted.

I’d be highly interested to see the outcome of a court case when Saudia denies a passenger boarding due to completely acceptable, non offensive clothing (by the standards in the country of origin) which still violates their rigid new dress code. I’m pretty sure that a European court would force the airline to pay denied boarding compensation in such a case. This is discrimination and nothing else.

Airfare of the Day [Business Class] SAUDIA Singapore to Amsterdam from $1,699