Always on the hunt for extra cash, Malaysia has discovered that they can squeeze their air travelers a little bit more and will start to charge passengers additional fees from 2018 onward. 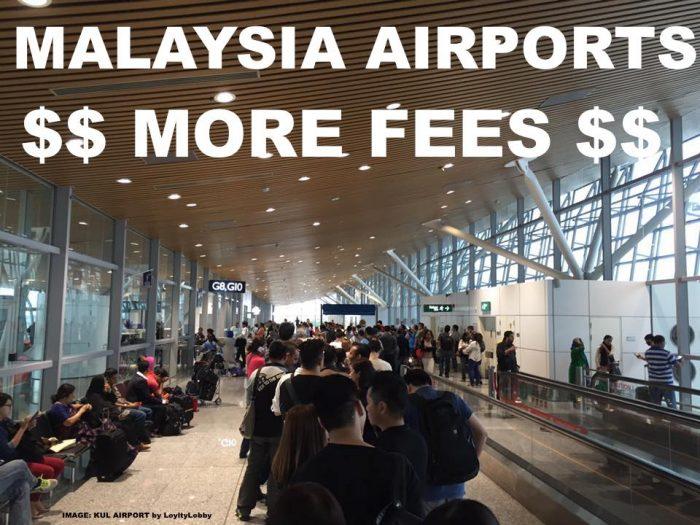 The new measures range from a tiny departure levy applicable to all (domestic & international) passengers as well as a 50% increased service fee for all beyond ASEAN departures.

One has to look at the big picture and not only how much the individual fee is. Although it might be a small amount by itself, the profits for the airport or the authorities in this case goes into the high millions annually.

Channel News Asia (access here) reported that fees will rise up to 50% for international departures.

Air travellers will be subjected to a RM1 (US$0.23) levy when departing Malaysian airports as early as 2018, the country’s aviation regulator said on Tuesday (Aug 15).

The new levy to be imposed by the Malaysia Aviation Commission, MAVCOM will be tabled in parliament in October. It will apply to all departing passengers for both domestic and overseas destinations except for rural air services in interior Sabah and Sarawak.

The passenger service charge at all Malaysian airports may also be raised from the current RM50 to RM73 for all international flights beyond Asean beginning January 2018 to standardise the system.

The passenger service charge is fixed at RM35 for all destinations in Asean.

KLIA 2 is the budget terminal, used by low cost carriers such as Air Asia while KLIA 1 is the main airport used by all mainline carriers including national carrier Malaysia Airlines Bhd.

23 Malaysia Ringgit (MYR) increase in passenger service fee are US$5.50 per departure to a non-Asean country.

Based on Malaysia Airports published passenger statistics (see here) there is a total of 43,243,000 passengers for International and 45,589,000 passengers for domestic departures. That’s 88,832,000 passengers in total and each of them will pay 1 MYR Passenger Levy. That equals US$ 20.6 Mio. without taking the passenger service fee for non-Asean departures into account which will also be considerable.

MAVCOM, which was set up last year to regulate the civil aviation industry, is expected to collect RM30 million in the first year from the RM1 levy, according to its chief operating officer Azmir Zain.

I can confirm there is a definite plan by Mavcom to charge RM1 levy to all departing passengers with exception of those flying the rural air services in Sabah and Sarawak. The purpose of the RM1 levy is to ensure financial sustenance and more importantly the independence of the commission.

In the last 12 months we have shown results. Example, by lowering the passenger service charge from RM65 to RM35 flat for all ASEAN destinations. That’s a saving of RM30 for customers.

I was honestly surprised about the large number of domestic departures but it sounds to me that RM 30 million is a bit of a low estimate given the official passenger numbers of the last year.

The increase in fees isn’t a lot but as I said on the bottom line it makes a huge impact. It’s not clarified in the article if the collected revenue will be used for aviation related services, the airport itself or if it’s being diverted into the governments pockets.

Kuala Lumpur Airport is actually quite nice but there are severe problems in some aspects, for example the lack of proper security screening at the gate. Mostly only one lane is open with no priority screening for Business Class available (see my picture above). In my opinion when airports or countries start to introduce new fees then they better get their act together as far as passenger flow and processing goes. In both security screening and immigration related matters.

Thailand Officially Extends Visa Amnesty For Visitors Remaining In The Country Until September 26, 2020