This week the Whine Wednesdays topic is something that we have covered here on LoyaltyLobby few times previously but not under this topic! 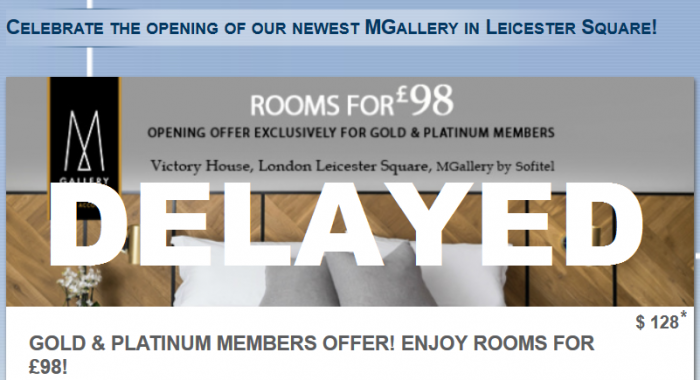 Have you ever come across a full service hotel that would have actually opened on time as originally planned and not been delayed at minimum by months and in some cases by years? And then there are those hotels that never materialize beyond the press releases!

There is new MGallery hotel coming up on Leicester Square in London called Victory House. They have been advertising special rate for Gold and Platinum members (98 GBP) that was originally available from August 10th and later from August 21st until September 11th. We have covered these specials here and here.

Now, it seems unclear if the hotel opens on August 30th (could be later).

They are offering to relocate affected guests to Hilton or offer 50% discount for a stay later this year (must be consumed by December 30, 2017).

Hotels owners and managers are obviously very optimistic when it comes to construction and development. Then there is the hiring and training the right employees. All this take time.

Obviously everyone would like the property start bringing cash in from the opening day and to do that they need to set a date.

I never try to stay at the hotel when it opens (usually soft opening). But if I am in the area and it is one of the more highly expected ones, I may turn up. It usually pays to wait 6 to 12 months to make sure that all the issues have been ironed out and all the outlets are up and running (and no final construction is going on).

The offer from the Victory House is an acceptable one. I actually had made a two night prepaid booking for next week that I would have not been able to consume. I thought that my plans were set in stone couple of weeks back but they weren’t. This saves me couple of hundred pounds as I will cancel the reservation and get my money back.

Not perhaps the best idea to have an opening offer for Gold and Platinum members if your hotel won’t end up being open at all during the promo dates….. Not sure who signed off this one….