Following dwindling profits, staff cuts and management shakeups Cathay Pacific announced a large net loss for the first half of 2017 as the carrier struggles with competition and their fare structure. 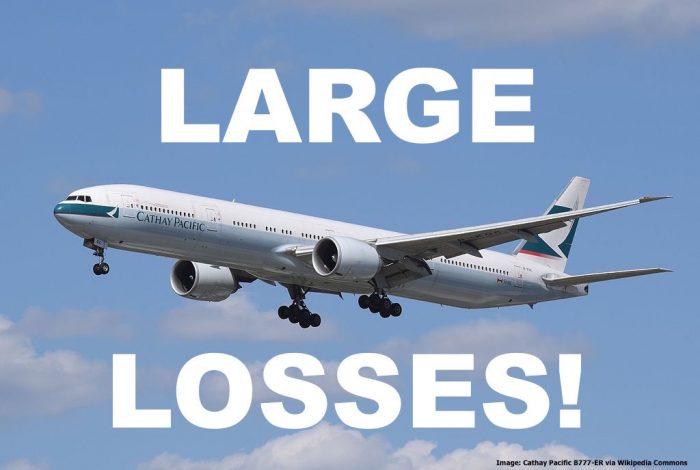 Cathay has been struggling for a while now to continue their successful years or at least break even, instead the carrier continues to pile up losses.

For years Cathay was one of the darlings for shareholder and customers with good service, modern planes and solid profits but under the surface issues started to brew such as labor issues with flight attendants and capacity problems at Hong Kong Airport.

For a few years now another, maybe even bigger problem came up on the horizon: Competition from Mainland China and the Middle East, eating into Cathay’s profits with an aggressive expansion and pricing strategy.

Hong Kong flag carrier Cathay Pacific on Wednesday reported a massive net loss of HK$2.05 billion (US$262.07 million) for the first half of the year as the airline struggled with intense competition from rivals.

The results, which were far worse than analysts predicted, came after Cathay saw its first annual loss in eight years in 2016, as lower cost Chinese carriers eat into its market share.

Chairman John Slosar described the results as “disappointing” to reporters. Bloomberg analysts had forecast a loss of HK$1.2 billion (US$153 million). Slosar said competition was the “most significant” factor in a statement to the Hong Kong exchange.

Higher fuel prices, a strong Hong Kong dollar and rising aircraft maintenance costs also cost Cathay, he said, as did fines from the European Commission over the airline’s cargo surcharges.

While certainly true I believe that Cathay has become arrogant and ignorant as far as customer demands are concerned. Their fares have never been competitive compared to other carriers, especially for regional flights in premium class. They also lack attractive sales for overseas destinations.

In May I wrote about Cathay’s plan to slim down their staff and management levels (see here).

It appears Cathay hopes their reputation as a quality carrier will be enough to justify high fares and there is no reason to discount. I fear that is simply not good enough because their hub in Hong Kong has also become extremely unreliable as far as delays are concerned.

Paired with frequent tarmac boarding (Bus Gates) and last minute gate changes at the huge Hong Kong Airport that doesn’t even feature an air side two way tram a journey with Cathay Pacific can become extremely frustrating nowadays. The airport and airspace around it is simply choked with traffic beyond capacity, mostly due to the limited airways in China (most of which are reserved for Chinese Military instead of civilian air traffic).

I don’t see the financial results of the airline improving by making cuts in staff and management. The problem sits way deeper and has to do with the customer approach. You can’t blame competition for all your troubles and continue on as usual while thinking that slimming down is solving all problems. Cathay has to start making up for their operational deficiencies by pricing their tickets properly and also offer occasional discounts and decent sales.