A rather disgusting case of a British Airways passenger en route to South Africa currently makes headlines as he was forced to sit in an Economy Class seat soaked with urine. 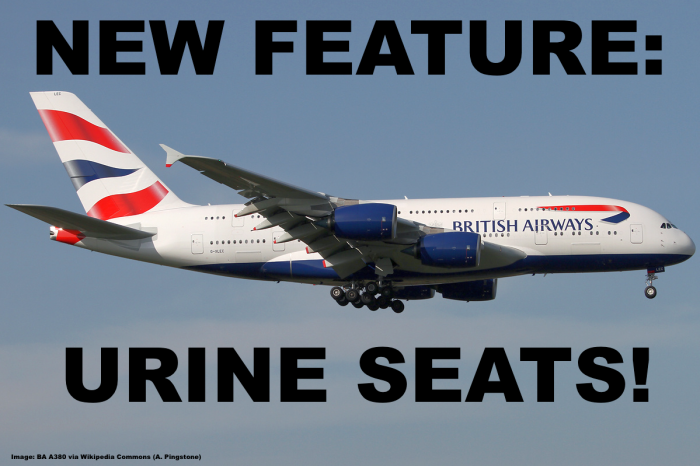 The crew apparently couldn’t be bothered to either reseat the passenger or clean up the mess in whatever way, resulting in the man sitting on it during the entire 11 hour ride.

This is just another case of British Airways literally taking the pi** and shows the dismal state of the airline. Not sure why something like this can’t be detected and fixed while the aircraft is on the ground at Heathrow before flying a long haul route.

The story appeared in many publications including The Sun (access here).

When Andrew boarded the flight on August 4 he noticed a wet patch which he assumed was water.

He recalled: “I got to my seat and saw that there was a wet patch. It was about the size of two decks of cards laid side by side. “At first I thought it was water but the smell was so distinct it could only have been urine.

“I told the stewardess and she smelt it and agreed it was wee. “She said ‘sorry about that’. Then she went to the toilet and brought me seat wipes and told me to clean it up myself.”

Mr Wilkinson asked to be moved to business class. He said: “I was in economy and it was full but they could have bumped someone up from business to first class and freed up a seat that way.

“I said to the stewardess: ‘You are obviously going to move me into business, aren’t you? I can’t really sit here’. “She said she would see what she would do but I wasn’t moved. And then she commented: ‘You are going to work me hard on this flight, aren’t you?’

Simply unbelievable, shocking and revolting at the same time. The passenger has every right to be moved to a different seat and should not have asked for it but demanded it.

If Economy Class is indeed full to the last seat then the cabin manager can move whatever passenger to Premium Economy or Business Class to make a seat change possible but in case they refuse to do anything the passenger should have left the aircraft in which case British Airways would be require to pay him EC261 compensation for denied boarding as they were unable to provide him with a functional and safe seat.

He devised a way to make it through the flight which consisted of perching on a blanket but was dismayed when his request for another blanket was not high on the crew’s list of priorities.

Mr Wilkinson said: “The same stewardess said: ‘I’ll get you another one, if I can find it.’”

He added that he had lodged a complaint with BA about the urine soaked seat but was unhappy with the compensation that the airline offered.

The furious passenger said: “I was given 5,000 Avios points and I just do not think that is a good enough compensation for sitting in someone else’s wee for over 11 hours.”

5000 Avios miles seems to be the standard compensation British Airways issues for all sorts of complaints these days without remotely considering the case on an individual basis. The airline has become a total disgrace and their crews are surly and plain horrible on par with U.S. carriers (used to be different but I guess they just don’t care anymore).

No matter how unmotivated you are in your job, in such a situation the cabin crew should do what needs to be done and re-seat the passenger or indeed notify the ground crew that they have a situation and need to bump a passenger off the flight. I don’t get how anyone could think this is acceptable. I would have even refused to sit even next to seat that is soaked in urine. For 11 hours? Over my dead body.

Last November I was in a similar situation with British Airways where upon boarding I noticed that my Premium Economy seat was defective. I brought it to the attention of the crew and was told nothing they could do and Business is full so I said fine, please notify the flight manager that they can offload me from the flight and make arrangements. I ended up flying via Hong Kong and successfully claimed 600 EUR EC261 compensation from BA through the CEDR in the UK.