Many frequent flyer programs including British Airways Executive Club have a requirement that the member has to fly a certain minimum number of segments of the programs own airline in order to achieve Elite status.

While some programs had this rule for years and never enforced it (American AAdvantage recently dropped that rule), BAEC still does enforce it rigidly and it put me in sort of a bind for this year.

I consider British Airways Executive Club as one of the best frequent flyer programs out there due to the fact that they calculate their status credits based on distance based zones and rather generous for Business and First Class tickets.

With the frequently available deals in Business Class especially those of Malaysia Airlines which we have featured frequently here on LoyaltyLobby.

However it’s not enough to just pile up status credits with partner airlines in order to obtain or re-qualify for Silver (Sapphire) or Gold (Emerald) status with British Airways. The program requires 4 flight segments per membership year for those status level that allow lounge access and also 2 segments for Bronze (Ruby) level.

The details are available on the BAEC website here. 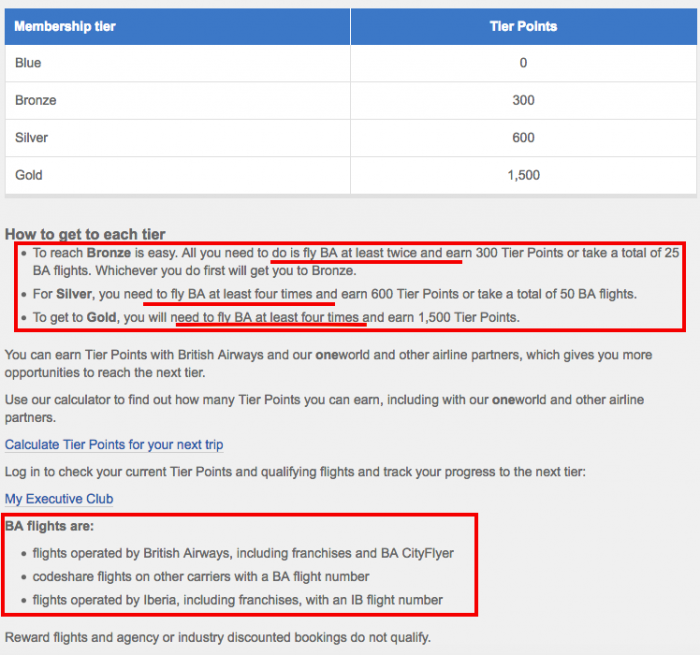 To get these segments isn’t really a problem for someone who flies British Airways on a regular basis but while I hold the program in high esteem I think that BA itself is a rather mediocre airline nowadays. Known mostly for strikes, bad service and not being very reliable. That’s why I stopped flying the airline long haul late last year and since I haven’t been in Europe much this year travel with BA wasn’t really in the books.

Even though my membership year ends early January the chances are I wont be going back to Europe beyond the trip I’m having right now. I decided the only chance to clock in the four required segment as a reasonable price was to do a so called ‘segment run’ between Germany and Belgium – via London.

I was able to book the two one way tickets TXL-LHR-BRU (89 EUR) and BRU-LHR-FRA (160 EUR) with a direct turn in Brussels, taking the same plane in and out (which is very easy in Brussels – I was the only person in the transit security area).

This investment of 249.00 EUR is the lowest I was able to find after playing around with all options for weeks. Currently based in Asia the only way to get BA coded segments is in combination with the Singapore-Sydney flight and corresponding connections for example to Auckland. However I had no interest investing at least 750 EUR for this combination in a pretty long Economy Class trip which would have been a waste of time and money at the same time.

As BA flights count all flights even those of partners that carry a BA flight number. An interesting route for such flights is for example Barcelona – Amsterdam on Vueling:

There must be other Vueling flights as well where it’s possible to book it on BA code. However if someone lives in Europe it’s easy enough to find either Iberia or British Airways flights.

I don’t think that applying the four segment rule is a proper condition for elite membership. It’s not always possible for a member to fly on a carrier that requires the passenger to travel to one specific continent. Sometimes you just don’t travel to Europe, the U.S. or Asia in a year because you’re occupied in other parts of the world.

I’m glad I got it done for this current membership year and it wasn’t very hard to do but in general I’d prefer to have this requirement eliminated especially for members with an overseas address.

Airfare of the Day [Business Class] ONEWORLD Toronto to Dublin from $1,471