This weeks Whine Wednesday makes a stop at Frankfurt Airport which is always under contruction and never seems to be completed in a coherent way. 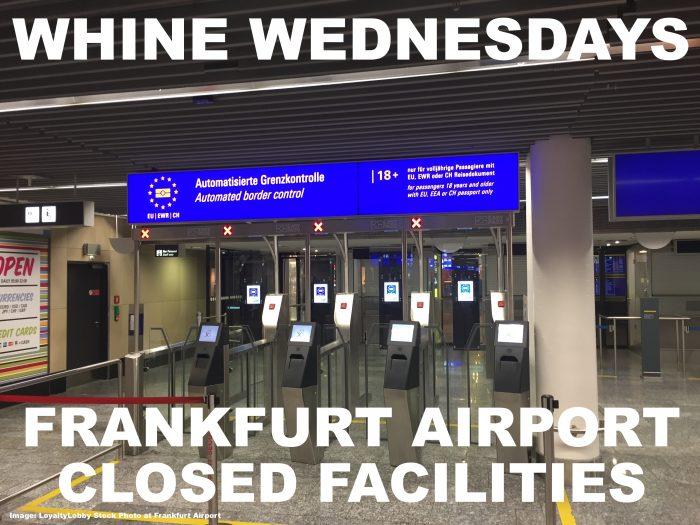 The list of inoperative facilities now also includes the electronic immigration barriers in the Terminal 1 B concourse, at least the set on the left side of the immigration area.

People usually have a love-hate relationship with Frankfurt Airport because for one it offers plenty of direct flights and a high frequency of connections but on the other hands FRA is just a giant monster that just doesn’t seem to take much effort in providing a proper travel experience.

Unless you’re using the First Class Terminal that Lufthansa offers to their First Class and HON Circle guests the experience might very well be quite uncomfortable though.

Security is usually very rude and unprofessional (Terminal 2 is even worse than Terminal 1) and now the immigration facilities are also inoperative to a large degree.

I remember when years ago the e-channel with Iris Scan opened and made immigration at Frankfurt Airport very fast and easy as it required special registration. This system was eventually scrapped when the Bundesgrenzschutz (BGS) changed to install the e-gates for all adult (18+) aged EU passports. All of a sudden almost anyone became eligible to use it and that includes people who never used it before and can’t figure out how to handle it, slowing everybody down.

As if that alone wasn’t enough, half of the gates aren’t even working at Frankfurt Airport, especially at the B Gates in Terminal 1. It has been this was the last three times I visited that particular terminal. Whenever I ask about why they are not in operation answers range from ‘no staff’, ‘under construction’ to ‘closed until further notice’.

Say about London Heathrow what you want but in comparison to Frankfurt at least their immigration facilities work properly. Whenever I arrive at FRA it’s like entering a permanent construction zone. Absolutely awful. Broken down escalators and walkways, water leaks and shut down lights. After arriving during early morning hours in May the entire floor was dark with only a few lights on. Frankfurt Airport has turned from Germany’s biggest airport to an embarrassment.