Ryanair has announced changes to their baggage policy which will see restrictions for taking wheeled carry on baggage on board while also lowering checked baggage fees effective November 1st 2017.

Any passenger who wishes to carry on a wheeled carry on (trolley) will have to purchase a priority boarding option for 5 GBP which will include extra legroom seats and enough space for the baggage.

The (in)famous Irish low cost carrier has always been at the forefront of controversial decisions and payable travel options and has now stepped up to ban wheeled bags entirely unless you purchase priority boarding. 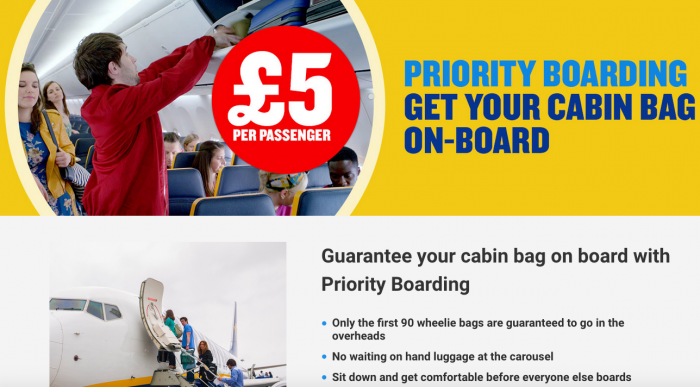 You gotta love the description ‘only the first 90 wheelie bags are guaranteed to go in the overheads’. Of course that might be true but if you’re already paying for Priority Boarding then you probably want your bag somewhere close to your actual priority seat and not somewhere else on the aircraft.

The Guardian (access here) also had a story about this today.

Ryanair customers will have to pay £5 for priority boarding from 1 November if they want to carry a wheelie bag on board, as the airline attempts to reduce boarding and flight delays caused by a shortage of overhead cabin space.

Priority boarders will still be able to carry on two bags, but all other passengers will be allowed to take only one smaller bag on board the aircraft. A second, larger, wheelie bag will have to be placed in the hold free of charge at the boarding gate, to be collected at baggage reclaim on arrival.

Ryanair is also lowering checked bag fees – a move that will cost the airline €50m (£46m) a year – and increasing the weight allowance to encourage more customers to check in luggage.

From 1 November, the check-in bag allowance will increase from 15kg to 20kg, while the fee for luggage in the hold will be reduced from £35 to £25. …

I have never set foot on Ryanair. Is the overhead space really an issue with them? Of course the less carry on bags an airline has to deal with the faster the boarding process will be.

At the same time the low cost carriers aren’t alone with these restrictions. Especially now that major U.S. carriers have introduced their ‘Basic Economy’ that often don’t even include large size carry-on pretty much duplicate, even set this new trend.

It’s good that the carrier reduces the checked baggage fees overall. Even the 5 GBP for priority boarding is a decent price if that means you don’t need to deal with checked baggage at all including waiting at checl-in and for luggage delivery.

Are you a Ryanair customer and what does this change mean for you in the future as far as your booking behavior goes?