A tear gars attack at Frankfurt Airport that left several people injured, respectively treated for breathing problems puzzles German authorities as they currently investigate where the substance came from. 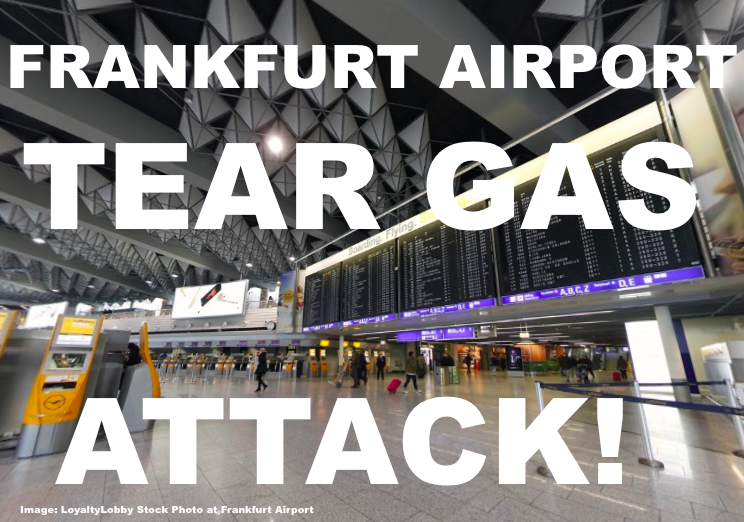 The affected check-in area of Terminal 1 has been shut down and passengers evacuated while investigations continued, causing delays and confusion.

As every big airport in the world Frankfurt Airport has frequent situations where they have to evacuate certain areas of the terminal due to suspicious items and individuals but Frankfurt had a bit of a turbulent week as well.

The Independent (access here) wrote a bit about what little was known so far.

Several people have been injured by a suspected tear gas attack at Frankfurt Airport in Germany. Witnesses said the check-in area at Terminal 1 was affected on Monday morning.

Police said six people were being treated for breathing problems after the incident at the country’s busiest airport. “The cause is unclear, investigations continue,” a spokesperson added.

Frankfurt Airport operators said the fire brigade’s operations had ended and found no “harmful substance” in the departures hall.

Check-in has reopened and flights are operating as normal.

The incident came less than 48 hours after a bomb scare caused a partial evacuation at Frankfurt Airport. A man who was believed to be suffering from mental illness told police he was carrying explosives in his luggage but none were found.

A previous alert was sparked on 31 August after a passenger entered a secure area before completing security checks.

Tear gas at the airport (if it actually was that substance) is obviously highly unusual because it’s not something that an individual casually carries around. I remember there was an incident at another airport not too long ago where someone disposed a can of pepper spray into the trash bin right before the security checkpoint and through whatever means the can emptied and caused havoc in the area. Pepper spray is a regular self defense item that is carried around by many. Tear gas… not so much.

Germany suffered some ISIS related terror attacks in the last 12 months and the authorities are obviously on high alert. Frankfurt Airport has cameras everywhere so it shouldn’t be all that difficult to investigate if something suspicious happened in that particular terminal area before the alert went out and people started to have breathing problems.