Today we have a Reader Question from Ron who recently flew on Aegean Airlines (A3) connection and was forced to check in and pay for his carry on as it was apparently oversized for A3’s cabin limits.

Ron flew from the US via Germany to Athens, Greece on an itinerary involving United, Lufthansa and Aegean (he did book one single ticket for the entire way). On the last leg operated by Aegean Airlines to Athens he ran into trouble with a gate agent who told his his carry on is too large and he’d have to check it in for a fee.

Here is the email:

I need your advise on where to lodge a complain regarding what I consider to be very suspect Aegean Airlines cabin baggage sizer at FRA and the very random way the Aegean gate agents in applying the cabin baggage allowance rule.

Yesterday (Aug 28 2017) I started my trip from PHX to ATH with stops in IAD and FRA. The PHX to IAD segment was with UA, then IAD to FRA with LH and finally FRA to ATH with A3. I brought with me my usual rollaboard which have accompanied me everywhere I go for the past 2 years with zero problem in terms of complying with airlines’ cabin baggage rule. Indeed my first 2 segments yesterday was also a non event. However, at FRA the Aegean gate agent decide to measure my rollaboard and of course it was found to be “oversized”.

Immediately I raised my protestation as to why it was NOT considered to be oversized by BOTH UA and LH just prior to the A3 flight with the gate agent. I voiced my frustration about the inconsistency of the cabin baggage rule between airlines that belong to the same alliance and furthermore I was flying on a single, thru ticket from UA! Although he conceded that there are discrepancies between Star Aliiance’ member cabin baggage allowance, ultimately he could not do anything as he was just following protocols and needed to charge me EUR 60 to gate check my rollaboard. Sensing that I was getting nowhere with my complain and was also time pressed as I was now one of the few left still arguing with gate agents regarding the gate check fee, I reluctantly paid up and board the plane without my rollaboard.

Once aboard, I was shocked to see so many cabin luggages of my fellow travellers which were CLEARLY oversized yet allowed on the cabin! I have attached 3 pics for reference. One was a skateboard that was -at least- 80 inches long while the other two pieces of luggage had to be stowed SIDEWAYS by FAs to allow the cabin luggage door to be latched properly. My rollaboard definitely does NOT need to be placed sideway inside the cabin luggage rack. I was now quite unhappy about this and quickly did a Google search on both UA and LH official cabin baggage allowance rule to compare them with A3’s. What I found enraged me more because A3 actually has the MOST generous cabin luggage allowance of the 3 carriers! Now, if both UA and LH found my rollaboard to be in compliance of their more stingy size rule then how come A3 found me to be in breach of theirs?? Just make no sense at all. Or does the sizer in use at the gate at FRA is NOT correctly sized in the first place?? Either way, I feel I have been robbed both in terms of money and the time spent waiting for my gate checked luggage to arrive at the carousel at ATH.

Who do you think I should lodge my complain with? UA as the ticketing carrier or A3 as the operating one?

Carry-On Rules are different from carrier to carrier and not universally applied. On top of that not every gate or check-in agent checks for the size and weight of the passengers carry on. Some people simply get away with large items and others don’t. The fact that a passenger has an international connection flight has no influence on the carry on allowance but it definitely has an impact on the overall checked baggage allowance.

Here is what I sent Ron as a reply:

… I’m not sure about the dimensions of your rollaboard trolley but even though it’s well known that United let’s passengers get away with many large carry on items (as US carriers often do) I somewhat doubt that it has been compliant with the Lufthansa rules to begin with. You probably just got lucky that nobody cared to check. Indeed European airlines are very restrictive when it comes to both size and weight of carry-on items to the point of it being completely unrealistic (some airlines have a weight limit of 6-7 KG).

While certainly annoying I don’t think there is any recourse you have to get your money back. The pictures taken pretty much symbolize that often people just get lucky not being caught when bringing on large items. I’d probably have refused to pay anything and seen if the staff threatens to deny boarding but I understand that isn’t everybodies cup of tea.

Of course the gate agent should apply the carry-on rules fairly and not pick on individual passengers. 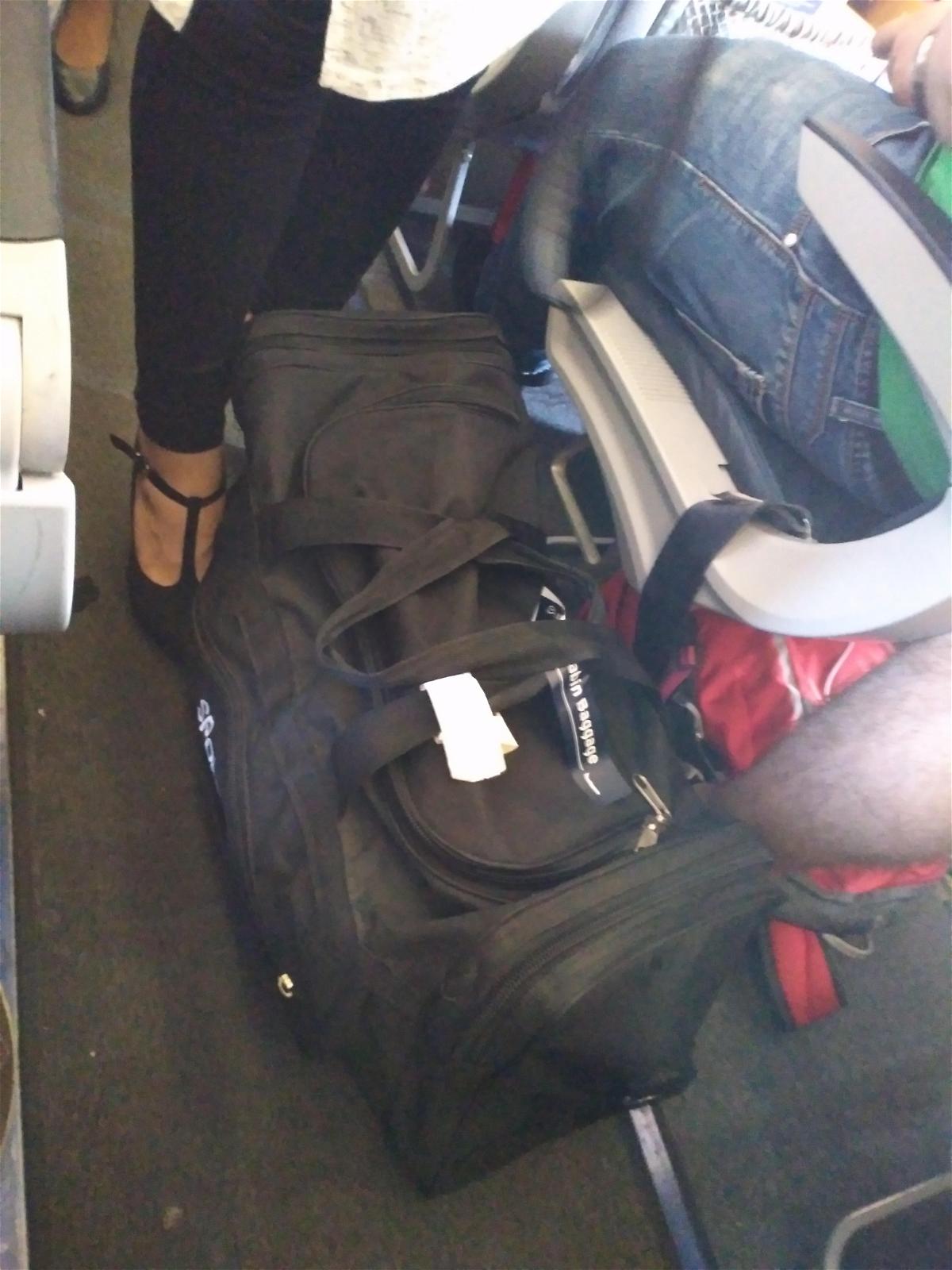 I doubt that this huge duffle/sports bag would have fit in the sizing frame that is standing at the gate.

You can access Aegean’s carry on and checked baggage policies here.

I’d say there is no recourse to receive the money back unless the passenger still had allowance under his international ticket and was charged unjustly. I’d check the travel documents for that to determine the exact allowance.

It’s rather strange and unusual that a gate agent picks on a passenger flying an international itinerary and makes him pay to check in his carry on. I do get the point that they do this to passengers who book some of the cheap intra-european fares that often do not include checked baggage and passengers attempt to carry half their household on board the plane.

I’d love to see how big our readers carry on actually in and how heavy it was. In any case this appears to be nitpicking to me rather than following the rules properly. Especially with the other very large items on board. As mentioned in the email I’d likely have offered they can gladly check the bag in (as long as they label it properly including a priority tag for Star Alliance Gold) but refused to pay anything for it.