British Airways continues to receive fair share of negative coverage on British press. Evening Standard today run a story about Brit trying to get to Athens. The direct flight turned to a 33-hour journey with four plane swaps! 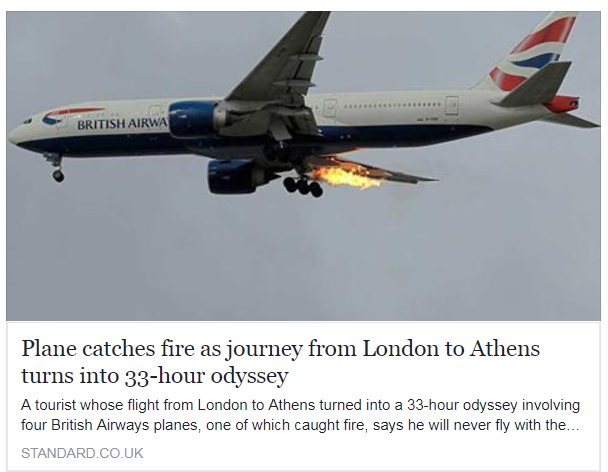 First flight was canceled due to faulty cockpit warning light, second one due to crew timing out, third one the engine blew out after taking off (see the photo), and seems that the fourth one got the passengers to their final destination (as they are live to tell their story).

The flight should take about four hours. The pensioner, who advises businesses on being more sustainable, said: “It makes me embarrassed to be British. We had Americans including a honeymoon couple… they just couldn’t believe it, they were shocked.

“There was no communication and it was unbelievable they could get so much wrong. I have been flying BA for nearly 40 years… I have been their most loyal passenger, but if I can avoid it now, I will.”

BA today confirmed that the Heathrow to Athens passengers were forced to board four separate planes over two days.

It said: “We fully appreciate how frustrating this experience has been and have apologised to our customers for the long delay to their flight.”

Every airline has occasional issues with aircraft, but these passengers were “forced” to board four different planes over two day before BA found working one. Perhaps passengers should have asked BA to rebook them on Aegean per EC 261/2004?

These passengers are all eligible for compensation per the same legislation. The compensation should be 400 euros in cash. Perhaps more if they were confirmed in more than one flight that ended up canceled/delayed.

British Airways definitely does have an issue with aging long-haul fleet. I am sure that they do enough maintenance to keep the planes airworthy. Minor mechanical delays, non-working seats and other equipment malfunctions (non-working AVOD for day flight from Beijing was fun the other year), however, are way too common.

Airfare of the Day [First Class] BRITISH AIRWAYS London to New York from £1,593

Thai Airways isn't doing much flying these days and someone had the great idea to transform a staff canteen at the companies head office...

Why World Of Hyatt Milestone Bonuses Stop At 100 Nights?