Malaysia Airlines and The Boeing Company have signed a Memorandum of Understanding (MOU) in Seattle paving the way for 16 new aircraft for MAS including (for the first time) Boeing 787-900 jets. 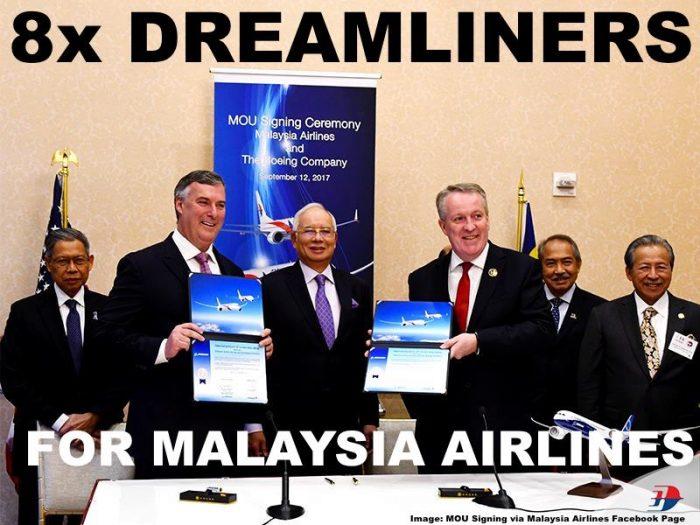 The ceremony took place during a U.S. state visit of Malaysia’s Prime Minister Najib Razak who also attended the signing, casting a small shadow of political motivations over the purchase.

While Malaysia Airlines does require new planes at some point especially after retiring the Airbus A380 (which are being replaced by A350s) and the loss of two B777 to tragic accidents it’s unclear if the amount of aircraft intended to be purchased is really suiting the needs of MH at this given time. The B737 Max8’s will compliment the fleet quite well in the regional fleet.

In Malaysia the election season is soon starting up and it’s not uncommon for the region (Thailand, Malaysia etc) that aircraft are bought for a political reason, namely to give incumbent candidates the opportunity for positive press and photo op’s such as this one.

Malaysia Airlines also wrote on their Facebook page where above picture was posted (see here):

Thank you Prime Minister Dato’ Seri Najib Tun Razak for gracing the signing of a Memorandum of Understanding with Boeing for 16 airplanes including eight 787-9 Dreamliners!

Bloomberg (access here) reported about in detail about the deal.

The airline signed a memorandum of understanding for eight of the carbon-composite Dreamliners, and eight 737 Max 8s, Boeing said in an e-mailed statement late Tuesday. The planes are worth $3.06 billion at list prices that exclude customary discounts.

The agreement marks a victory for Boeing in a competition that had been viewed as favoring rival Airbus SE. Malaysia had been in talks for the European planemaker’s A330neo wide-body jets but had been unable to reach a deal on price, Chief Executive Officer Peter Bellew said in an interview in June.

Malaysia Airlines may double an order of 25 of the single-aisle 737 Max 10 over the next five years, Malaysian Prime Minister Najib Razak Najib said at a meeting with U.S. President Donald Trump at the White House on Tuesday before the announcement. …

Najib said there is a “strong probability — not possibility — probability that we will add 25 more 737 Max 10 in the near future. So within five years, the deal will be worth beyond $10 billion.” His government will “also try to persuade AirAsia to purchase GE engines,” the prime minister said. …

Malaysia Airlines, taken private by the nation’s sovereign wealth fund Khazanah Nasional Bhd., has been trying to win back customers following two fatal air crashes in 2014. The carrier, on track to become profitable next year, has been adding more services in Asia after cutting jobs and unprofitable long-haul routes to keep the business afloat.

The airline leased six Airbus A350s from Air Lease Corp. to offer flights to London next year. It has also ordered 737 Max 9 and Max 10 aircraft from Boeing last year with deliveries expected in 2019 and 2021, respectively.

Again, the PM’s statements sound a little to intermingled with the affairs of the company but hey, who really expects anything else? In any case for the customers it can only mean good things to receive new aircraft and Malaysia Airlines isn’t expected to be in the profit zone for at least another year. So we’re probably lucky to see more of the nice MH Business Class sales that have been going on for the past few years.

A signed MOU isn’t a firm order or even legally binding, however MH’s fleet of regional aircraft is in a dismal state and I can’t wait until new aircraft are finally introduced.

Malaysia Airlines currently operates their Mid-Haul and long haul routes mostly with Airbus A330 that also feature the new Business Class. Destinations include Beijing, Shanghai, Hong Kong, Seoul, Osaka, Tokyo and various Australian cities as well. They are by far my favorite plane in the MH fleet as of now.