Passengers of a Los Angeles bound Hainan Airlines flight were furious when they encountered a delay of 15 hours after the Captain of the flight allegedly brought a wrong passport to work that day. 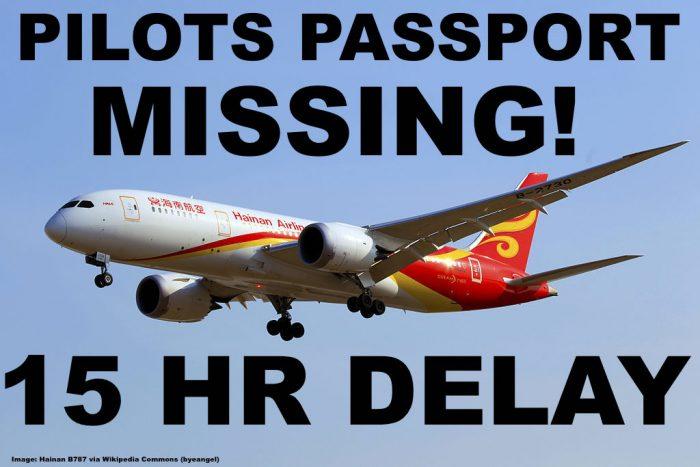 This information comes from an airport employee who handled the affected customers and they received a sum of 500 CNY each to make up for damages incurred.

If true then this was a major screw up by the pilot but also by Hainan Airlines who didn’t have a reserve pilot available to jump in at the last minute. What if the pilot would have been sick instead of having this passport situation happening?

I got this story from ECNS China (see here).

Hainan Airlines has paid compensation to passengers booked on a flight that was delayed for nearly 15 hours, possibly because the captain brought the wrong passport.

The flight was scheduled to depart Chengdu for Los Angeles at 9:15 p.m. on Sept. 10. But more than 150 passengers waited an hour after boarding the plane at Shuangliu International Airport before being told to disembark. They were later moved to a hotel, and the flight departed the next day.

Several passengers said the delay affected their itineraries in the United States, including the loss of prepaid accommodation and transportation costs.

The airline said it had paid 500 yuan to each passenger because of the delay.

A female passenger surnamed Zhang said a staff member with a HAN employee ID card told passengers the delay was due to the captain accidentally bringing his private passport, rather than his service passport.

A number of passengers on the flight confirmed the report.

The airline said it was uncertain who had made that claim, and that the specific reasons for the delay were still under investigation.

Let’s say this report is true then of course it’s a huge blunder but something that can obviously happen. I’m not familiar with the design of these passports in which way it differs from the regular Chinese passport.

The compensation payment of 500 CNY per passenger is a complete joke. Many people likely had hotel and car reservations and this really messed up their plans and certainly created expenses higher than that.

Does Hainan really not have a reserve crew available for such instances when a crew member, cockpit or cabin, gets into a situation where they can’t fulfill their duty that day?

In any case the carrier must have felt pretty bad and guilty because paying money out voluntarily is something usually unheard of in China.