An Air France A380 jet bound for Los Angeles suffered an engine explosion and made an emergency landing in Newfoundland, Canada where passengers were able to leave the aircraft. 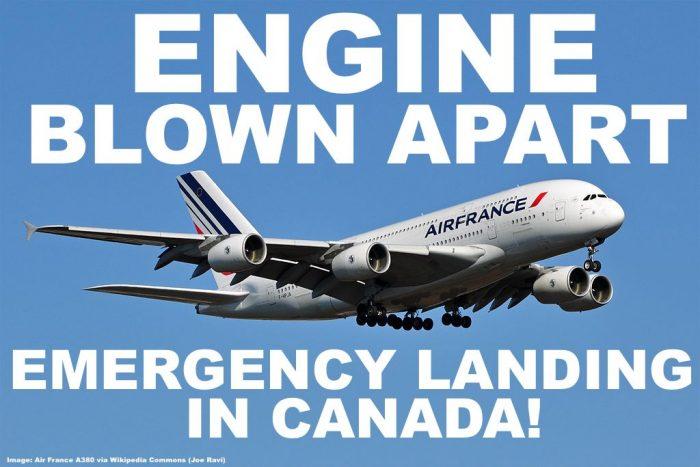 Passengers were able to see the disintegrated engine from their seats while looking out the window, likely occupied with the thought of how to make it down alive.

Situations like these are the ones you wish to never be a part of and yet when it happens nobody has a choice. The accounts of passengers on this flights come across pretty mixed.

You can find a summarized report from the New York Times (see here).

An Air France flight bound for Los Angeles from Paris made an emergency landing in Canada on Saturday after one of the jumbo jet’s four engines exploded in midair, passengers said.

Passengers aboard the double-decker Airbus A380, the world’s largest passenger airliner, described hearing a loud noise about five hours into the flight. The plane, which had just crossed the southern tip of Greenland, vibrated for several minutes.

Photographs and videos shared by passengers on social media showed tattered metal surrounding the exposed interior of an engine, its white covering blown away. One fragment, dangling from the main body of the engine, bobbed in the wind.

Here is the flight path of AF66 provided by Flightaware (access here):

Passengers wrote on social media that the Captain sounded ‘shaken’ when he made the announcement and that he used the terminology ‘the engine exploded’.

Here are some pictures that are circulating on Twitter:

‘Engine Failure’ Halfway Over The Atlantic by theamadoor (see here):

“Loud thud and a lot of vibration’ by RickEngebretsen (see here):

Yikes, these pictures can really scare you and I’m typing this from a plane above the Pacific. Good the pilots had it under control (more or less) and it was possible to reach the closest airport within just two hours. Looking at my inflight map at the moment I don’t see anything that could be reached within two hours.

Amazing how fast these pictures come to us nowadays with the widespread installation of inflight internet. For the passengers this will for sure be a memorable flight especially as they are now awaiting alternate transportation in Goose Bay (a super tiny airport).

Anyone remembers when the Qantas A380 engine blow up over Indonesia and returned back to Singapore? Back then a defective (fractured) oil feed stub pipe leaked oil into the bearing chamber. In Qantas case it was a Rolls Royce engine while the Air France uses GE/Pratt&Whitney engines.