This weeks Whine Wednesday is about one of more aggravating things that can happen to you on a plane, namely your seatmate starting to eat fast fast food (such as burgers) brought onto the plane. 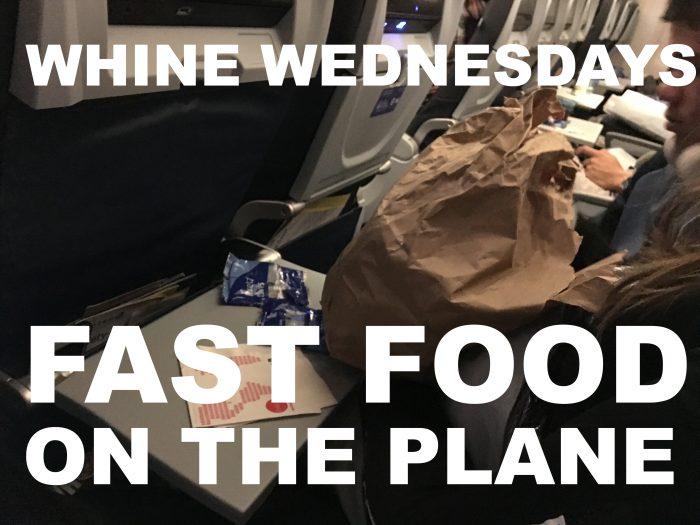 Burgers, hot dogs, takeaway… all these things people like to eat in a proper fast food place where it doesn’t really matter how bad it smells since it’s an open space and you can get out of there quickly.

When I flew United to Hong Kong a few days ago and got settled in my seat it didn’t take long until I got two seatmates and they even brought something else along: A paper bag full of burgers and the smell was simply atrocious.

It didn’t take long until I made a comment (perhaps I should have been more restrained) and suggested that she re-seat herself if she plans to continue eating these burgers throughout the flight. The plane was indeed quite empty that day and she got up to find herself a new seat.

I really can’t get a grip how people think it’s ok to bring bad smelling food on a plane and especially into small spaces such as Economy Class (United Economy Plus in this case) and think they have the right to inconvenience other travelers with their choice of nourishment. It’s bad enough having to sit in Economy for an extended period of time so why make it extra miserable?

People like these are simply mind boggling. First of all as per her boarding pass she had the aisle seat, yet she chose to sit in the middle on top of it being a free upgrade to Economy Plus (seat didn’t get filled until the very last minute).

On top of it you really got to wonder about the United ground staff why they fill the seats next to their own United Star Alliance Gold customers on such an empty flight to begin with and not think a little bit to at least leave a middle open. We’re talking about at least 1/3 of all seats open on that flight.

In any case it’s good that person got up and took her fast food refuse (leftover packaging) with her because the next step would have been talking to the purser about this. If you like burgers (I love burgers!) then eat them at the terminal where you buy them. Behavior like this simply drives me up the wall.