Alitalia has sent out an email to their MilleMiglia Frequent Flyers that they will restart the program with a ‘new edition’ on January 1st 2018 and that all miles earned until that date expire by the end of March. 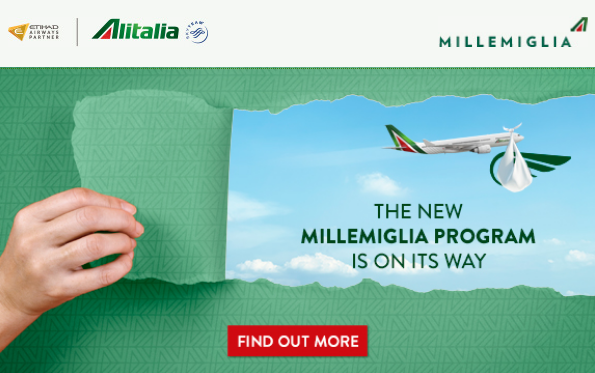 There is however a special promotion that members who purchase and fly 4 one way flights between 1 January and 31 March 2018 will be able to carry up to 100% of their miles into the new program.

It’s no secret that Alitalia is in a financial predicament to say the least with the company burning money faster than a furnace and they just received yet another 300 Million Euro ‘loan’ from the Italian government (likely never to be paid back).

I’m not sure what they mean with ‘new edition’ as they make it sound like the most normal thing in the world to reset every couple of years and start again.

You can access the Alitalia MilleMilglia landing page here.

Starting 1 January 2018 a new edition of the MilleMiglia Program will be launched with many opportunities to reward yourself.

A special extension will allow you to spend the miles earned during the current edition of the Program, giving you two additional months, up until 31 March 2018, to reward yourself choosing among the many possibilities offered.

How very generous of them!

If you’re concerned about your current mileage balance (if any) there is the following offer:

The new edition of the MilleMiglia Program will also include a special initiative for our most loyal members: purchase and take at least 4 one way flights between 1 January and 31 March 2018 and carry over into the new edition up to 100% of the remaining miles at 1 April 2018.

It doesn’t elaborate anywhere what ‘up to 100%’ means but I could imagine that since it specifically mentions 4 one way flights, each segment would allow for a rollover of 25% (don’t nail me on that – that’s just an idea!). Neither does it say if one single round trip ticket with 4 segments would qualify.

The options from which members are able to choose in order to redeem their miles until the end of March 2018 include the standard redemption options:

I credited a few short flights to Alitalia back when MilleMiglia offered status matches but was able to redeem all miles not too long ago for a short haul award within Asia. I’m quite happy to have a clean slate with them now but I can imagine the situation being not so funny at all for someone who has a large balance with them.

I recommend to have a look at your account balance and find a solution for these miles in the very near future. For one, there is already an announcement the program will expire and their ‘new edition’ is coming with the miles losing their value on March 31st unless the member fulfills the criteria for the promotion.

On the other hand there is always the strong possibility that Alitalia will go down the tubes entirely similar to Air Berlin and we all have seen how fast that can go in recent months. The insolvency of Air Berlin also showed that it likely means the immediate end of the frequent flyer program as well, no matter if it’s spun off from the main company or not. So the best to get any value out of the miles is to book something as soon as possible.