When John wrote about the most recent Avianca LifeMiles promotion yesterday one of our readers alerted us in the comments that the program is once again actively blocking award availability.

Avianca LifeMiles has been quite active in their various ‘Buy Miles / Share Miles’ promotions over the years of which they usually have one per quarter, however they have also tweaked the program with little to no advance notice on many occasions.

The program became popular as a way to book award travel at relatively low cost (even at current levels) but has at times frustrated the members due to the unreliable website and active blocking of certain award options. It appears that this has once again become an issue in recent weeks.

LIFEMILES started to block awards from ASIANA, EVA and THAI in any class…

So, it’s not recommended to spend any money with this company, since you won’t find, since they changed their search tool page some weeks ago, awards tickets with partners.

Indeed I was searching for award availability myself in the past few weeks, specifically on Lufthansa, Thai and EVA Air and wasn’t able to find much, let alone in premium class.

When I read the comment this morning I decided to have another look and was surprised that award availability is actually back. However I found it impossible to find Lufthansa First Class awards to/from any destination I looked at.

Here are some examples of what I was able to find:

So it appears that award availability has been fixed in some terms as far as the Lifemiles engine is concerned, at least in the short term (all availability I checked for was in the next 2 weeks).

I was also able to find routings on Asiana to/via Seoul in Business Class as well as various connections on EVA Airways. First Class was available on several routes using Thai Airways and ANA.

Singapore Airlines is almost impossible to find even in Economy Class except on Frankfurt-New York. There is almost certainly some blocking going on with them but that has been the case for a long time.

The fact that Lufthansa First Class can not be booked on LifeMiles at the moment can have many reasons including that Lufthansa is the culprit who blocks LifeMiles out. That being said they are scarce with First availability even for their own members and there are only eight seats even on the routes that actually have First Class.

LifeMiles has proven to be a very unreliable program over the years. I wouldn’t purchase miles with them unless I have an immediate use for them and see availability in the Lifemiles search engine. 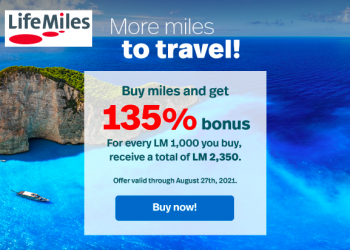 Avianca LifeMiles has launched a new "Four Days Only" promotion for buying miles and is offering 135% bonus for mileage...