Lufthansa has put an interesting offer called AnyWay on the German market that might benefit many who don’t mind traveling in Economy Class, especially one way to eleven international destinations.

The conditions are that the customer purchases either a one way or round trip on select available dates to his destination but he isn’t told right away what his actual flights will be (can end up being direct or an any LH Group connection).

As someone who often uses one way flights I find this new product highly interesting especially because of the low price point and the attractive destinations.

The range of origins and destinations is probably the most important part of this deal that needs to be cleared up and in fact I’m quite surprised to see many worthwhile city pairs included in the offer.

For one, all the departure airports are in GERMANY ONLY and this product is only available for the German market, even though round trips can be purchased.

Now let’s come to the conditions, including the sour grapes (for some) as expected if something sounds almost too good to be true:

Austrian Airlines AG is the contractual partner for the procurement of the AnyWay Travel Pass. You will receive all documents pertaining to your purchase, including your itinerary, exclusively from Austrian Airlines.

Based on this passage I’m assuming the ticket stock will also be on Austrian Airlines, although the final itinerary might not include flights on Austrian at all.

Here is a graphic illustration provided by Lufthansa: 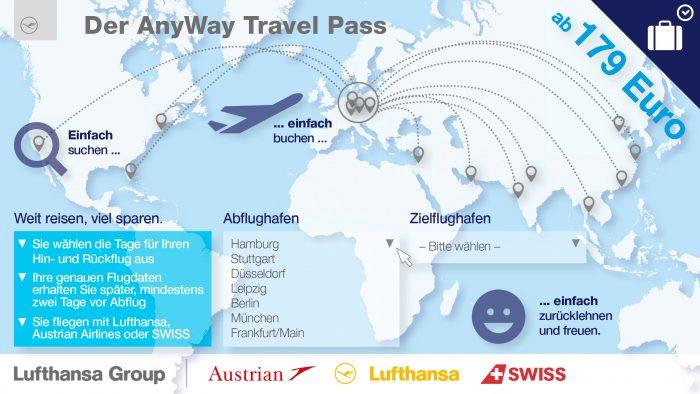 How will that look in practical terms? For one I think the real sweet spot here are the one way flights that are usually quite expensive. It’s almost always possible to find a return flight at the price point of the double base fare as it’s in play here (360 EUR for Dubai, 560 EUR to Asia) while it’s absolutely impossible to get a one way flight for half that on a quality carrier.

Whenever you try to book one way flights on Lufthansa Group airlines you’ll have to deal with very high fare classes, often even full fare. The only sensible thing to do in such instances is to use miles, even for Economy Class.

So how does it look when you attempt to book such a ticket?

The only dates that are currently available to book are 5 days in December, nothing in November or beyond the dates visible in the example above (don’t work for me at the moment but just as an example). That’s however outlined in the T&C:

When processing the payment you’ll be charged exactly 279 EUR and payment has to be processed via Credit Card. There was no option to pay via direct debit from a bank account as from the regular Lufthansa website. However that also means there is no credit card payment surcharge either.

I was curious to compare that to what Lufthansa sells for that day on their main website: 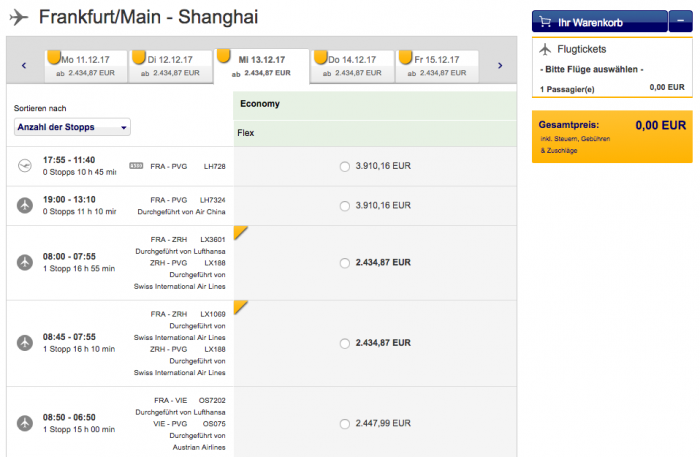 Only Flex tickets with a pricing between 2,400 and 3,900 Euro ONE WAY are available on the website.(likely booking class Y (full fare) which are of course fully refundable and upgradable as well). If you’re ever interested in a Lufthansa one way I suggested to call them or a travel agency to see if better fares are available. The website isn’t known for always offering the best fare available, quite the opposite.

A huge *careful* sign however for anyone who plans to travel as a couple, group or family:

Identical flight offers, particularly routings, cannot be guaranteed for more than one passenger. The Lufthansa Group Airlines may create individual bookings with varying times of departure and arrival depending on flight loads on the selected day of travel. Families traveling with children under the age of 18 are exempt from this regulation. In this regard a common routing is guaranteed.

So if you’re traveling with somebody else there is a strong possibility that they might split you up. Not really something that will be fun to break to your travel companion(s).

And as far as baggage is concerned:

One piece of hand luggage weighing up to 8 kg as well as one bag weighing up to 23 kg are permitted. Furthermore, we explicitly reference the conditions of carriage of the operating carrier that are accessible by link under article 1.4.

So Star Alliance Gold benefits regarding baggage also don’t apply (even though I’m not sure how strict that will be handled but best to expect the worst). There is no restriction in the T&C related to other status benefits such as lounge and priority check-in so those should still apply.

However there is something very interesting in the FAQ when it comes to the topic of miles:

That is indeed a very strong data point as far as upgrades are concerned because it means that the tickets must somehow book into an upgradable booking class (min S/W) and would likely earn corresponding mileage as well. Usually the cheapest offers would be in K Class and you can’t upgrade those.

If mileage upgrades are available that means eVocher upgrades for Lufthansa Senator and HON Circle members should be too.

Question remains how much upgrade space is still available if you only receive your ticket a couple days prior to departure but better than nothing. If you are lucky and the ticket arrives earlier you might also be able to place an online bid for Premium Cabins.

Another downside of receiving your tickets this late is also that you won’t be able to make a decent seat reservation ahead of time.

I’m really intrigued to try this at least once since as I previously said ‘If the price is right, sit tight!’ and you can’t beat a 279 Euro one way Lufthansa ticket to Asia or North America. Having the option to upgrade the ticket is also great if you have instruments at your disposal.

There are however many drawbacks as I lined out especially in terms of baggage, potentially being split up from travel partners and not being able to reserve seats in advance.

I’d recommend this for folks who are either super flexible or aren’t affected by the potential issues I outlined above (such as single travelers, especially with status).

Whine Wednesday: Lufthansa Lost Baggage Not Delivered For Eight Days After Being Located

Reader Question: What To Do With Expiring Lufthansa Miles&More Miles? Anyway To Extend Their Validity?