Nationals of the U.S. as well as Taiwan will soon have access to each others Trusted Traveler programs, Global Entry and the eGates at Taiwanese ports of entry as the reciprocal relationship begins on November 1st 2017. 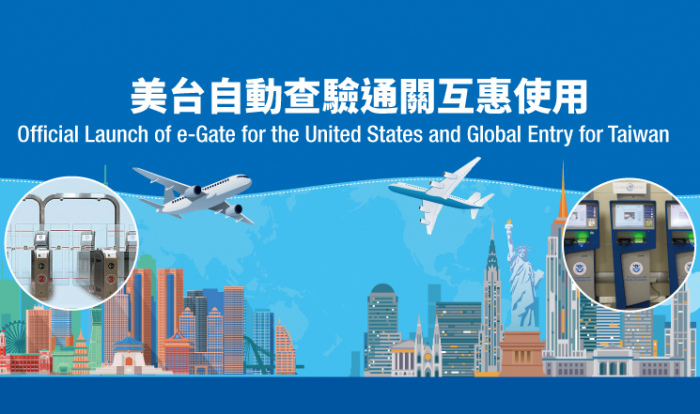 A requirement is to be registered with the national trusted travel system after which individuals can then apply to their counterparts program as well, subject to the enrollment fee.

Having Global Entry for U.S. arrivals is probably the best travel investment one can ever make in terms of convenience, paying $100 for five years of electronic entry. Even though there are now complimentary pendants to Global Entry at many ports such as Mobile Entry.

The American Institute in Taiwan (access here) made an announcement about this upcoming partnership yesterday.

At a ceremony today at Taoyuan International Airport, senior representatives from the United States and Taiwan, under the auspices of an agreement to be signed by the American Institute in Taiwan (AIT) and the Taipei Economic and Cultural Representative Office in the United States (TECRO), jointly announced the November 1 eligibility expansion of U.S. and Taiwan trusted traveler programs – the U.S. Global Entry program and the Taiwan e‑Gate program.

On November 1, the 5th anniversary of the Visa Waiver Program in Taiwan, Taiwan will join a select group, becoming the 12th partner worldwide and 3rd in East Asia, whose passport holders are eligible to enroll in Global Entry. At the same time, U.S. citizens enrolled in a CBP Trusted Traveler Program will become the first non-residents to be eligible for Taiwan’s e-Gate. …

E-Gate is an automated border control system available to registered travelers to expedite entry into Taiwan. U.S. citizens who are members of a CBP Trusted Traveler Program (Global Entry, NEXUS or SENTRI) are eligible to register for e-Gate.  To enroll, U.S. citizen Trusted Travelers are required to present a valid passport and have their photo and index fingerprints taken by the Taiwan National Immigration Agency at an enrollment counter in Taiwan. The application fee for e-Gate is 3,000 NT (approximately $100).

As of now the eGates Information website (see here) doesn’t show any updated information, in fact the information on there are documents/content dating back to 2016 which hasn’t been changed since.

Talking about value that’s a tough call to make. I guess it depends on both the amount of your trips to Taiwan but also the experience you had so far. I’m going to Taipei frequently (well, 5,6 times a year) and while I had a rather long line 2-3 times before usually immigration at TPE is a breeze. I’m not entirely convinced it’s worth spending $100 on.

Taiwanese passport holders will have to create a profile at the official website of the U.S. Customs and Border Protection (access here), pay a non refundable application fee of US$100 and then undergo a background check. If approved there will be a mandatory interview at a CBP Global Entry Enrollment Center located at all major U.S. Airports and some additional locations.

The more lines you’re able to cut and circumvent at the airport the better. At the same time money is money so as I said above I’m not entirely convinced that I’d pay $100 at a really efficient country such as Taiwan where I’m usually through immigration in a matter of minutes.

For Taiwanese citizens visiting the U.S. frequently this could be a worthwhile investment though since lineups at the U.S. ports of entry are notoriously long.