Singapore Airlines has aviation enthusiasts on suspense the last couple of months as everyone was waiting for the first glimpse of the new A380 First- and Business Class cabin.

Now the moment is finally here and SIA has unveiled their new products which are a huge improvement over the current (dated) A380 cabin and feature a pretty fantastic design.

Singapore Airlines was the launch customer for the A380 and the first carrier that rolled out the revolutionary Suites product, featuring a full bed or even a double bed when the two Suites in the middle of the cabin are combined.

Over the years Singapore Airlines has adjusted their routes and now some destinations aren’t served by the A380 anymore (such as the Los Angeles-Tokyo-Singapore route) while at the same time the products on the A380 became quite dated and didn’t receive much love in terms of upkeep (many scratches and defective remote controls). Even more reasons why customers were awaiting the new A380 product anxiously and now it’s finally here!

The seat itself is a really revolutionary piece as it’s not a static piece of furniture. Singapore Airlines describes it as “Richly upholstered in full grain leather by Poltrona Frau. Reclinable to 45° and freely swivels. So you can sit back and recline at ease.”

The bedding features a “comfortable sleeper suit and slippers from Lalique. as well as a 100% combed cotton duvet designed by Lalique for Singapore Airlines, complete with fluffy pillows.”

As far as entertainment goes, in the Suites TV screens are attached on the wall next to the door so it’ll be possible to comfortably watch from either the bed or the chair.

Large improvements have also been made for the bathrooms available to Suites class passengers as those are now very spacious and rather luxurious compared to how the facilities are equipped right now.

But not only the Suites are getting a new face, Business Class is also shining in an entirely new light and the seats will be completely different from what we know right now. 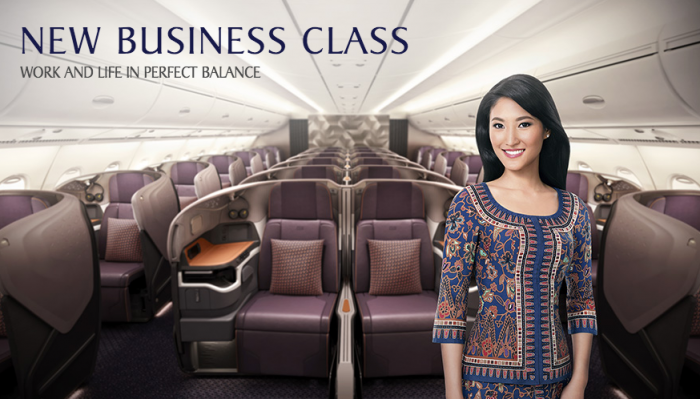 The seat width will be slightly reduced and it can be transformed into a bed mechanically compared to the manual effort required at the moment. New Business Class seats in the middle are also able to be merged together.

The first flight that features this new product will be

As can be seen from the seat map, availability is significantly reduced to six suites total from the previous number of twelve: 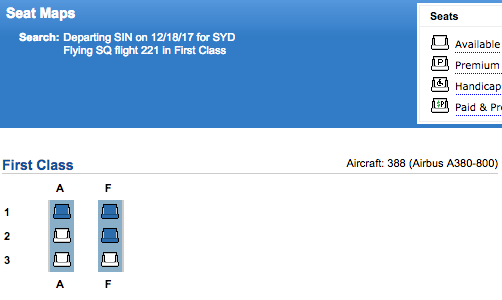 Unfortunately this reduction should pretty much take care of the great availability of seats using KrisFlyer miles so let’s be careful what we wish for when it comes to a fleet wide roll out of this new product.

It was about time for Singapore Airlines to set a benchmark again in terms of cabin interior (and some might still say that Etihad is currently on par with them). Singapore Airlines Suites are now on the market for an extended period of time and the product, while absolutely fantastic, was getting dated. I don’t hold my breath though there I’ll be able to fly on it using KrisFlyer miles anytime soon. Though some folks who have existing bookings might be lucky if they get this new equipment. At the same time the capacity reduction might get SIA into hot water if the new flights are suddenly overbooked in Suites.

The new A380 design is also a vast improvement for Business Class customers at least from the looks of the new seats. They seem much more functional even though the small foot space which forces the passenger into a rather weird sleeping position is still there. I really wish they’d have done away with it and figured out a new design option. I’m not sure how well received the double bed in the open cabin design will be. Business Class isn’t a very private product in most cases and the thought of frolicking in a double bed with your loved one for the entire cabin to see probably isn’t everyone’s cup of tea.