Qatar Airways will introduce their fifth destination in Thailand as they announced a 4x weekly rotation to Pattaya, starting on the 28th January 2018. 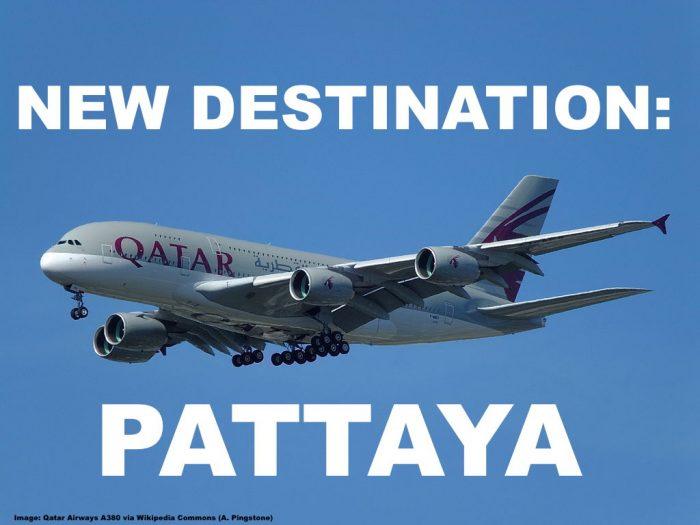 Over the years Qatar Airways has developed Thailand to one of their most prolific destinations as far as capacity and overall frequency is concerned.

Currently Qatar already serves Bangkok, Krabi and Phuket with Chiang Mai coming up in December and then the Pattaya inaugural in January.

You can access the press release Qatar Airways prepared in their media center here.

Qatar Airways has responded to increased customer demand for services to Thailand by launching direct flights to Pattaya, the airline’s fifth route to the country.

The new four-times-a-week service, which starts on 28 January 2018, is in addition to the airline’s existing flights to Bangkok, Krabi, Phuket and soon to be launched, Chiang Mai. The launch of the service to historic Chiang Mai is scheduled to start on 12 December, 2017. …

Qatar Airways will operate a Boeing 787 Dreamliner, with 22 seats in Business Class and 232 seats in Economy Class on flights between Doha and Pattaya International Airport, on its winter schedule. It will be the first five-star Middle East airline to offer flights to and from Pattaya.

I have never flown to Pattaya Airport but their domestic and international departure list shows a variety or arrivals/departures mainly from China and the South East Asia region. In high season it’s also common to have large carriers from Russia including a TransAero Boeing 747.

Pattaya/Rayong has a few nice resorts but is also known for a rather seedy nightlife. It’s still (or maybe because of that) very popular and a transfer by car from Bangkok’s main BKK airport takes anywhere between 2-3 hours by either car or bus.

For those who travel to the Pattaya or Rayong area it’s certainly a great option that also saves plenty of time compared to flying into Bangkok. I wonder though if QR can really fill that many planes given how much capacity they already have to Bangkok?

Airfare of the Day [QSuites] QATAR AIRWAYS Tokyo to London from $2,389