Earlier today I had an interesting situation at Bangkok Airport as my Malaysia Airlines connection flight in Kuala Lumpur was delayed for 3.5 hours until 2:30am and I refused to take that flight.

I was subsequently moved to a direct Thai Airways flight but not properly rebooked via eticket, instead they issued a relic from the old days of flying: A handwritten FIM receipt.

Flight Interruption Manifests are basically a voucher issued by the operating carrier in case of irregular operations such as cancellations, delays and misconnections. The voucher serves as payment guarantee for the new carrier the passenger is moved to and pretty much a leftover from the pre-electronic ticketing days. I haven’t seen one of these FIM since probably 2004.

It all started with an email and SMS I received in the morning: 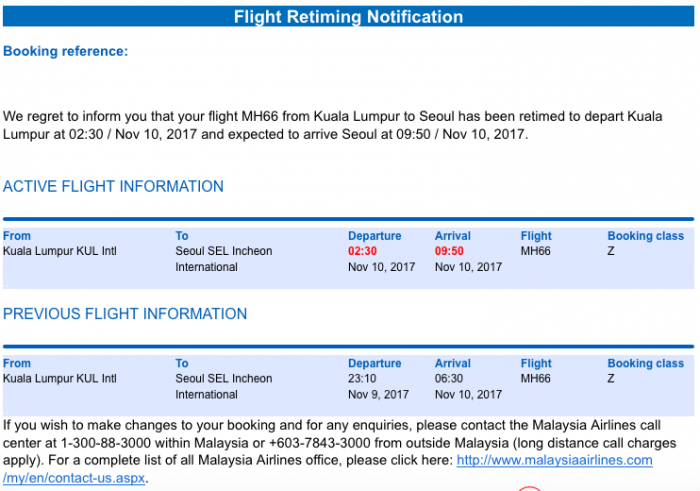 This delay which Malaysia Airlines calls a ‘retiming’ until 2:30am is completely unacceptable for many reasons. One being that the First Class lounge at KUL is currently closed (we wrote about it here & here) and only some pretty awful alternatives are available, all of which close around midnight.

The other reason being that Malaysia Airlines does this frequently with the Incheon flight, likely to cut costs for parking in Incheon (the flight arrives 6:30am and doesn’t depart until 11am). John had exactly the same thing happening to him some time ago and got rebooked on the Korean Air departure at 11:50pm. This wasn’t an alternative for me as I can’t do much with Korean Air mileage credit on either program. Maybe on Alaska Airlines Mileage Plan but that would require Malaysia to rebook me on the original KE code and not the MH codeshare.

I called the Malaysia Airlines reservation hotline as quoted in the email but with no results. The agents were generally unwilling and not authorized to do anything and all they said is ‘go to the airport’. Useless!

Since I was pretty much done at home I just went to the airport to keep my options open since there are several flights, either direct or with a connection to get me to Seoul in a timely manner. Initially the staff wanted to pressure me to fly to KL to get rebooked there but I refused since I knew it wouldn’t do me any good. I was then offered a flight on Korean Air or Thai Airways, I chose the latter. Thai Airways operated a Boeing 747 and I thought maybe I could upgrade to First Class somehow (wasn’t possible in the end due to the FIM).

Then came the surprise:

As I said I haven’t seen such a FIM Voucher for at least a decade and I certainly had my fair share of irregular operations and rebookings over the years. I’m not too surprised though given that Malaysia Airlines didn’t even have a manager available today there would have been nobody who’d be versed with ticketing. In any case it wasn’t much of an issue to check-in with Thai Airways after presenting the document. I got a nice seat in the upper deck of the 747, unfortunately it features the old Business Class seats.

An upgrade to First Class wasn’t possible since it hasn’t been e-ticketed. Otherwise I’d have used 20k United Miles. I even offered to pay cash for one of the Thai Standby Upgrades but they refused because it’s originally MH Ticket stock. No wonder Thai Airways is that deep in the red if they refuse the $500 Upgrade fee outright. Yet anything is better than to deal with Malaysia Airlines unreliable operations.

I did take a picture of the FIM document and also asked Thai to print my new itinerary as I’ll try and get an original routing credit with my frequent flyer program (I doubt it will work but you never know). In any case the flight on TG was certainly a good choice because I was able to use the Thai Airways Spa and the new Singapore Airlines Business Class Lounge. I also entered my United Premier Gold number and will get credit for full fare C (based on the TG printout) for this route. Better than dealing with some redundant credit from the Korean Air flight.

Most airlines have moved entirely to e-ticketing nowadays and such paper FIM’s are only used when there is a system meltdown such as on British Airways earlier this year. Pretty much everything can be done electronically now as long as the airlines have an interline and e-ticket agreement. And of course it requires an agent to know what to do which is highly difficult in the case of Malaysia Airlines. But always nice to see a bit of nostalgia along your travels!