This weeks Compensation Clinic is about a stay I had a few weeks ago at the Delta Hotel Vancouver where I used Marriott Rewards points on a one night stay. 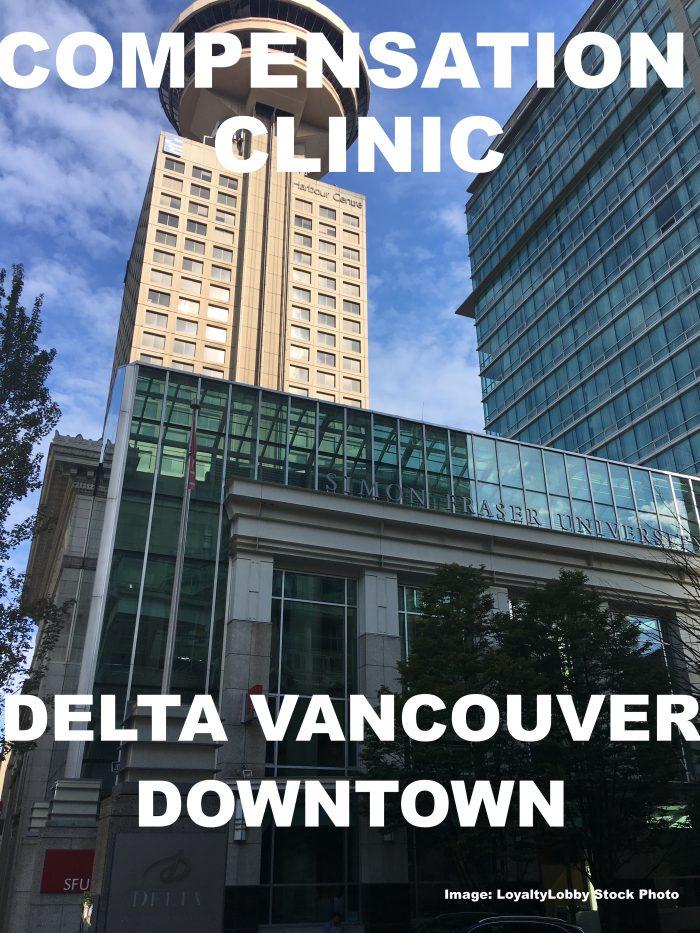 When I booked the Delta Vancouver I had high hopes for it as it underwent a recent renovation and I had stayed there in the past as service has always been great.

While on the high side for an award I decided to use 35,000 Marriott Rewards points for a one night stay at this all suite city property and checked in at around 3PM which went pretty well, even though a room with a proper view wasn’t ready right at the beginning.

The new renovations turned out quite well, the suites are spacious and have a nice color scheme (picture of the bedroom below).

The problem started in the evening as I was out and about for most of the day. At the time I was about to go to bed at around 11pm I noticed a ventilation noise that came from the hallway. I shut down my air condition already since I hate noise at night so I was sure it didn’t come from the a/c unit.

I called the front desk and they took almost an hour to send up someone from the engineering department to check it out. It was an air vent in the hallway right behind the door. The gentleman left without any update. A further 30-40 min I called the duty manager again asking if they would be so kind to give me an update on what’s happening with the noise.

Answer was that the air vent is centrally controlled and can’t be shut down. Next day I was told by the Front Office Manager that it was installed to ‘keep the rooms fresh at all times’. Keep in mind this is a non-smoking property. It wasn’t a constant noise buy rather went on and off every 20 minutes or so. It drove me nuts and as per the night manager each room has the same installation. I woke up at least three times that night.

Next morning I met with the front office manager and flat out told her this is outrageous and that I’ve seriously not seen anything like this in any hotel previously. There might be air vents but if you install them then use proper units that are quiet, especially at a hotel. I requested my points to be returned and left the hotel.

After nothing happened for several weeks I contacted Marriott Customer Care about the matter and asked them to get in touch with the hotel in order to have these points returned. I refused their line ‘the hotel will get back to you’ based on the grounds that I already communicated with the property and it wasn’t very fruitful. The associate agreed.

… The hotel has contacted me letting me know that the points shouldbe returned and credited back to your account within three to five businessdays. And wanted to relay this message to you. However if it does not please letus know of this.Safe travels,E.M., Marriott Customer Care

The transaction of 35,000 Marriott Rewards points showed up several days after:

There were also some issues at the breakfast (empty restaurant, yet no service staff could be bothered to seat the customers) which didn’t even go into this case. Really sad as I think the renovation came out very well design wise yet they managed to destroy it in other areas.

Last but not least the matter got regulated. Whenever there is something that pretty much disturbs my sleep in the middle of the night and wakes me up and it’s due to some maintenance, installation or hotel staff issue I have absolutely zero problem of requesting that night to be waived.

As mentioned that vent was extremely loud and I find it totally unnecessary. No hotel I stayed at, especially one that was just renovated, had such an air vent installed that would drive someone nuts even though it’s in a totally different room. The fact that you can’t even shut it off makes it even worse. Someone certainly saved money at the wrong end here!