Sometimes when hotels provide such bad customer service that it’s really hard to recover from it during your stay it’s best to cancel the reservation on the spot and walk away to stay at another hotel. 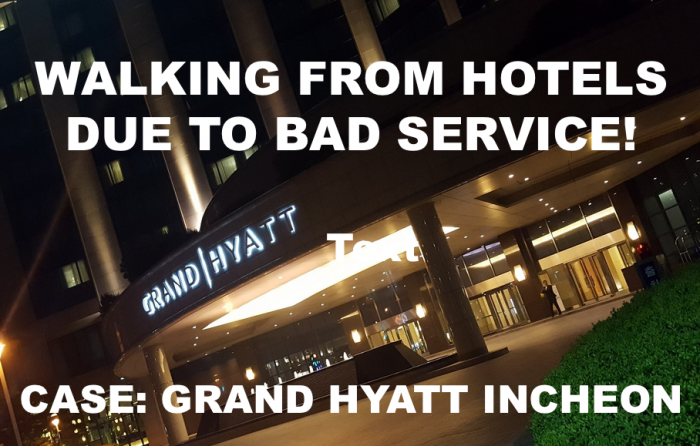 I had one such experience last week at the Grand Hyatt Incheon, a property that seems to have serious staffing issues when it comes to service, management and most of all common sense.

There are hotels that simply don’t get their issues under control and more often than not it’s a case of completely incapable management. One of these examples is the Grand Hyatt Hotel Incheon Airport in Seoul where I had a one night reservation:

The property is located in a decent distance to the airport terminal and offers frequent shuttle service which makes the hotel a convenient option on the face of it. Furthermore Hyatt Globalist members usually get upgraded to the newly renovated West Tower where they have a nice lounge and that’s where the problem starts.

Guests usually don’t get told in advance where they actually stay and the bus drivers make no announcements so the first thing that happens every single time you arrive at that hotel is hearing arguments between guests and hotel staff that the guest needs to trek to the East Tower (old!).

The main issue in my case as once again that you need someone with an active, coded key to let you up to the Grand Club to complete your Check-In. Since the Grand Hyatt had once again no door staff and no elevator staff I asked the front desk (Elite Desk) to check in at the Grand Club Lounge. Oh boy…

Five people at the front desk, four of them trainees and none of them understands a word of the request. Check-in? Check-Out? Elevator? What is the Grand Club? During this entire discussion it dawned on me it would have probably been smarter to just check-in downstairs and stop talking to the staff altogether but whatever. Finally the concierge got called over to bring me to the elevator. Finally! Problem now: He doesn’t even have an elevator key and disappears for more than 4 Minutes in some back office, not returning. Back to the front desk where I’m being asked (by the same person who talked to me before) if I want to check out.

Since I had issues at this hotel before that I discussed with the General Manager I asked for the Gentleman again. Instead of placing a simple phone call to his office she explains a story for over two minutes. By that time I had enough and told her to cancel my reservation, knowing there are several hotels in the area where I’ll be able to stay instead.

I checked on Orbitz and found availability at the new casino hotel as well as the Best Western Premier Incheon, both of which are in walking distance from the Hyatt. I decided for the Best Western since I’m Diamond with Best Western Rewards and the rate was actually very low:

$80.80 for the overnight is actually 50% of the rate I would have paid at the Grand Hyatt Incheon and my departure time was relatively early in the morning (why else would I stay at an airport hotel?), I really didn’t care if I stay at either property so I walked over to the Best Western which took me just 5 minutes.

I wrote a complaint about the entire matter to Hyatt management and the General Manager following by some lip service of the GM, same as last year where it wasn’t possible to get a simple table at the Hotel Restaurant for dinner as a paying member of the Club at the Hyatt dining program ($300 per year). Absolutely useless.

Overall it was once again a complete waste of time and honestly a mistake of mine to even consider the Grand Hyatt Incheon. The hardware is actually ok but the weakest link at this hotel is staff and management. Rarely have I seen such a poor operation as it is the obvious standard at this property which is owned by Korean Air (or their mother company, respectively).

It’s sometimes better to just walk away from a hotel reservation and stay somewhere else if the check-in experience already indicates that the stay will be miserable. Especially when the effort required is actually minimal and you (or your company) can even save money in the process.

Interestingly enough not only did we save 50% of the original rate by simply staying at the Best Western but the treatment there was excellent, as a Diamond member I was even upgraded to a Premier Room and given a fruit amenity. And the staff was actually able to communicate clearly with the guest, something that’s obviously too difficult at the Hyatt.