Indonesia’s Volcanology and Geological Disaster Mitigation Centre has issued the highest aviation warning this morning by upgrading the flight alert level from orange to red for flights above and around Bali Island. 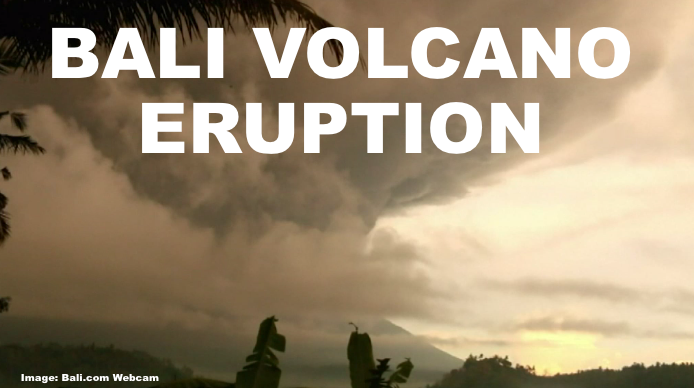 This comes following the second eruption of the Mount Agung volcano on the Island of Bali where volcanoes have caused disruptions in air traffic and evacuations on the ground in the past.

Many airlines have canceled flights since yesterday evening even though Jetstar and others have already announced flights would resume later today.

Channel News Asia (access here) reported about the most recent developments roughly an hour ago including the aviation warning.

This is the highest aviation warning when a volcanic eruption is underway with a significant amount of ash in the atmosphere. Mount Agung continue to spew more volcanic ash into the sky after it started erupting for the second time in a week on Saturday evening.

“At 6.20am (local time), the eruption reached between 3,000 and 4,000m from the summit with the ash moving in a southeast direction at a speed of 18km an hour,” said the National Disaster Mitigation Agency’s spokesman Sutopo Purwo Nugroho in a statement on Sunday morning.

However, Mount Agung’s current eruption is still not considered dangerous.

The alert status remains at level 3 out of 4, with authorities warning residents not to conduct any activities within a 6 to 7.5km radius from the volcano.

Denpasar is a very busy international and domestic airport in Indonesia due to Bali’s large popularity with holidaymakers from around the world, especially Asia and Australia. Some airlines including Air Asia, Singapore Airlines, Jetstar, Garuda Indonesia and Virgin Australia have large scale operations there and should passengers be booked to either travel to or leave from DPS it is strongly advised to consult the airline for further information.

Jetstar (see here) has updated their announcement this morning that flights would resume:

We will recommence flights to and from Bali this morning.

Our senior pilots, using information and forecasts from the Volcanic Ash Advisory Centre, have assessed the latest conditions in Bali following the eruption of Mount Agung and deemed that conditions have improved and it is safe to fly.

Most scheduled flights to and from Bali today will operate.

The volcano and movement of ash cloud are highly unpredictable and flights are subject to change at short notice based on assessment of safety to fly.

Singapore Airlines operates all their flights ‘on schedule’ as per current flight status notifications.

In a case like this, airlines usually put travel waivers in place that allow passengers to either change their flights or cancel free of charge. Hotels might also be willing to grant exceptions for their customers and be flexible as far as changes and cancellations go, especially if the situation gets worse and airspace will be closed.

For carrier/hotels without such provisions or if you have purchased your trip as a holiday package it would be the best to consult the tour operator or your travel insurance. If you are unsure if you indeed have a travel insurance be aware that some premium credit cards such as American Express Charge Cards often include such policies for their members.

As of right now most airlines appear to operate on schedule or with minor delays. It’s recommended to monitor all flight activities through the airlines website and if possible set an alert for those flights a passenger is booked on.

Should anyone be affected by a flight cancellation due to the volcano it’s probably the best suggestion to hold out and try to sort out things from the comfort of a hotel. As with all cancellations, it is often much easier to resolve a cancelled flight via telephone instead of at the airport where options are limited and lines are extremely long.