Hyatt has updated their website with a new ad, boasting they have ‘More than 700 Hyatt Hotels around the world in 56 countries’ that baffles the international traveler knowing how limited their footprint is. 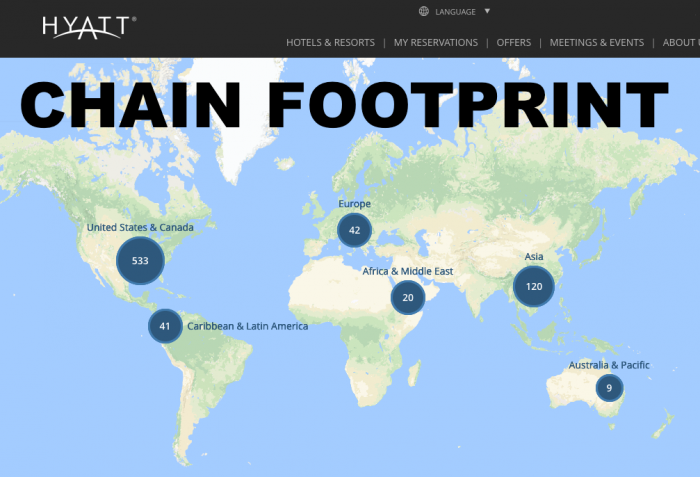 The numbers on Hyatt’s world map add up to 765, yet 533 of them are in the United States and Canada, leaving huge holes in the rest of the world (especially in Europe).

The issue with Hyatt’s footprint in certain markets compared to their global competitors has been known for years and especially in a densely populated continent like Europe there are rarely any Hyatt hotels to be found.

Yet someone in the company thought the current numbers are a reason to boast about the chains global presence:

My issue is not so much with North America or even Asia where plenty of Hyatt properties are available but a look on the world map shows the apparent lack of choices in the rest of the world.

Is this really enough to be competitive and to serve customers while at the same time maintaining a loyalty program that requires 55-60 nights for top tier status?

Here are some numbers from the competition to compare:

The numbers of the competition speak a clear language in comparison to the ones Hyatt currently has to offer. Even the smallest major competitor Starwood (soon to melt into Marriott) has 3 times as many hotels as Hyatt and a much superior loyalty program at that.

It’s almost guaranteed to be able to find a hotel room with one of the big five global chains wherever you go in the world while it can be extremely hard to find a Hyatt property. This matters for customers who are either global travelers or even those who are pretty much reliant on their own region as long as it isn’t North America or Asia where the company (Hyatt) is in the fast track to get more properties year by year. By mid 2018 Bangkok for example with feature four Hyatt brands: Park Hyatt, Grand Hyatt, Hyatt Regency and Hyatt Place after adding three brands within just a year.

Europe and the rest of the world continue to remain cut off and that’s in combination with another issue from the loyalty perspective. The European just like the Australian properties are all relatively expensive in their average daily rate (ADR) even for their lower end brands such as Hyatt Regency. The limited footprint and upward pricing makes it very difficult for customers in these markets to be loyal to a chain such as Hyatt when achieving a top tier loyalty membership requires an investment of roughly 10,000 EUR annually, even if there is a property available.

This issue doesn’t exist for those who have access (travel pattern wise) to the North American market provided they have an extensive travel schedule allowing them to clock in such high numbers. Being able to avail oneself to the Hyatt Credit Card issued by Chase Bank also makes things much easier, especially since the promotions and points accrual options have been decimated under World of Hyatt.

While a number of 765 might sound decent, in comparison it’s really nothing. In any case I don’t think having such a small footprint and market share is something to be particularly proud of, certainly not a reason for an advertisement focusing on it.

It remains to be seen if Hyatt as a company will be able to survive over the coming years after we’ve seen the takeover drama around Starwood in the past year. There have been rumors in the past of Hyatt being bought either by a competing chain such as Accor or an overseas investor. Chinese company Anbang which was in the race for Starwood but eventually dropped out has been sort of called back by the Chinese government to limit their exposure but others are still out there.

I’m one the people who’ve been drinking the Hyatt cool aid a little too much over the past 10 years and while I like certain key properties I feel that the Hyatt Touch as they used to call it is long gone. The loyalty program became a shadow of it’s former self while the competition left their own programs pretty much untouched apart from certain devaluations of the currency (which Hyatt did as well, just remember you were able to stay at the Park Hyatt Tokyo for 18,000 points a night which is now 30,000). Right now I’m lucky that I have a large travel portfolio with 130+ hotel nights per year and living in an area where there are plenty of Hyatt properties, otherwise dealing with the chain wouldn’t make any sense compared to what else is out there.