Malaysia Airlines has taken delivery of their first Airbus A350 aircraft which will soon replace the carriers A380 on the Kuala Lumpur to London route from Spring 2018. 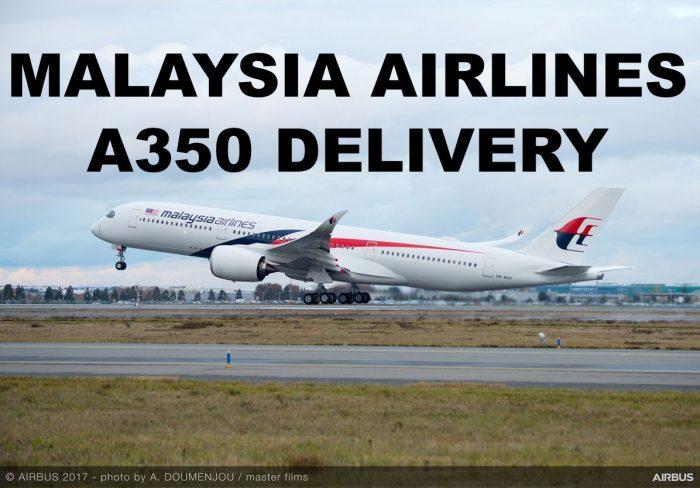 Before the aircraft goes on the long route to Europe the airline will first use it on some regional routes such as KL to Bangkok to train the crew in the operations which might be a sweet spot.

Those looking to fly the A350 first might be in luck when monitoring the schedule on various routes ex Kuala Lumpur as the airline will start using it on the KUL-BKK-KUL route for crew training which makes it extremely interesting to book flights on this route (very affordable tickets in Premium Class especially ex BKK). The aircraft will also feature a First Class cabin.

You can access the Airbus press release concering MAS’ A350 here.

ALC receives its first A350-900 out of an order for 29 A350 Family aircraft. Eventually Malaysia Airlines will operate six A350-900s, all leased from ALC.

Malaysia Airlines will initially deploy the aircraft on flights within Asia. From the first quarter of 2018, the A350 will fly on the airline’s premier long haul service from Kuala Lumpur to London.

Malaysia Airlines is the first carrier to offer a First Class cabin in the A350-900. The aircraft is configured in a three class cabin layout with a total of 286 seats. This comprises four in First Class, 35 in Business, featuring convertible seats to fully flat beds and 247 in Economy. …

Lucky for me I checked my upcoming flight to Kuala Lumpur in December and I’m actually booked on one of these flights. Even better, I was able to select the First Class cabin with a Business Class booking:

That will be interesting and certainly a welcome change to their filthy regional B737 without any Inflight Entertainment System and no wardrobe. Nevertheless it’s a short flight but probably the most comfortable one on such a short segment together with the Thai Airways First Class flights to Hong Kong and the 747 with First Class cabin (can be selected with Business Tickets) that are sometimes used to Singapore.

Of course best is to not look forward to it too much as there can always be last minute changes in aircraft rotation.

Hopefully the A350 will help Malaysia Airlines to operate the London Route more profitable again. Until then we can enjoy the brand new aircraft on the regional flights for very little money, even in a First Class cabin. Can’t beat that value considering the prices on these routes (see my $500 ticket for BKK-KUL-PVG/TPE-KUL-BKK in Business Class).

Still No Solution For Malaysia Airlines, Carrier Faces Shut Down While Losing US$84 Million Each Month

Marriott in Germany yesterday informed the board of Design Hotels AG that they intend to buy out the rest of the shares they don't...