It is not uncommon for hotel guests to leave with pens, notepads and hotel toiletries (and perhaps some other items too). 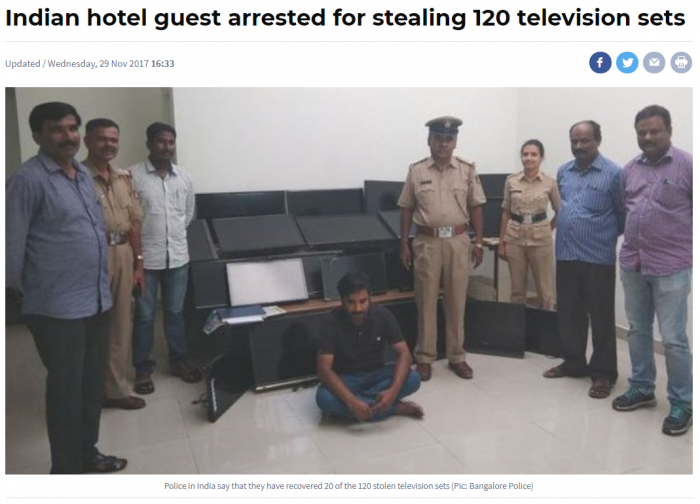 Seems that a hotel “guest” in India had something else in mind when he ended up stealing the TV sets from the rooms he had booked.

Here’s an excerpt from RTE (access the piece here):

Police in India have detained a man who stole 120 television sets from hotels over four months, according to officials.

Vasudev Nanaiah booked into budget hotels in states across southern India with oversized bags to put the televisions in when he left.

If the room television did not fit his bag, the 34-year-old man would go out to a local market to buy a bigger suitcase, police alleged.

Hotel staff never suspected him as he was very well behaved.

It always make me to roll my eyes when some higher end hotels have price list for most items in the hotel room/suite starting from the bathrobes and ending up with the pillows.

There is a reason why hotels usually require guests to leave credit card on file for incidentals. This usually means that they are credit worthy and perhaps hotel can charge for any items taken or damage caused.

Perhaps this guy should have opened his own TV shop with all the units taken from various hotels or offloaded them on India’s version of eBay! Incredible India indeed!