A LoyaltyLobby Reader From The UK sent us a question by email about the SAS Plus product and what is complimentary from the on board menu that is for cash only.

I had a really bad experience on the SAS Plus product today as a paid for upgrade which I bid for. I thought it would be a nice treat for my holiday.

On neither of the flights did they offer you to select food/drinks from the onboard menu as they advertise. First flight it was a small salad or nothing & on second flight it was a tiny cheese roll or nothing (no salad, no sandwiches, no pizza options as per their onboard menu) I asked them and said we don’t serve these on these flights. Even though their inflight menu says they do for anything over 80 mins. I did some research beforehand & other people’s blogs/reviews said they did get a selection of the menu for food and pics of lots of various salads & sandwiches etc which seemed in line with what I was expecting.

The second flight got worse. I asked for a gin & tonic & was told this isn’t served on this flight. Even though menu says anything over 80 mins & it was on my first flight. I settled for a red wine instead. Half way into the flight I asked for a second drink & was given a barrage of abuse from the attendant saying if you want a 2nd drink you can pay for it, as Norwegian law states only one alcoholic drink free can be served. I challenged him on it & he said do people in UK think they know the law better than he does. I was really embarrasseing & it was done very loudly & publicy in front of all the passengers. I asked to speak to the cabin manager who didn’t seem to care , apologised but said he is correct & you have to pay if you want an additional drink and I’m not business class so what do I expect, which annoyed me further. I understand that but two glasses of wine doesn’t to me seem excessive consumption or you are asking too much of them for the amount paid as an upgrade.

I’m not sure if it’s the law or not but I told her regardless it’s the attitude of the attendant is really not appropriate. This law or policy isn’t noted anywhere & certainly on my flight for Manchester this wasn’t the case as they offered additional drinks and I’ve never known it before on other flights.

I’ve filed a complaint with SAS as this whole situation was really awful. Are you aware of such a Norwegian law or policy about free alcohol consumption? What’s your view on the SAS Plus product advertised not being what you get onboard. I’ve asked for a full refund of the upgrade fee because of the situation & their attitude towards me as a passenger in this case. Says 3 weeks before I’ll get a response to my case so will let you know outcome.

Here are some photos from the food offerings that I had on my SAS Plus flights earlier this year: 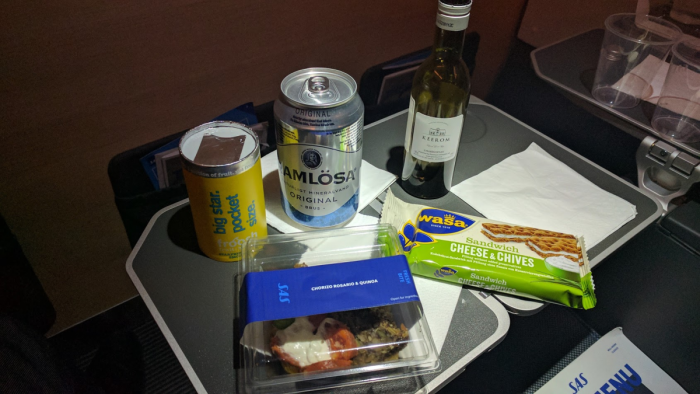 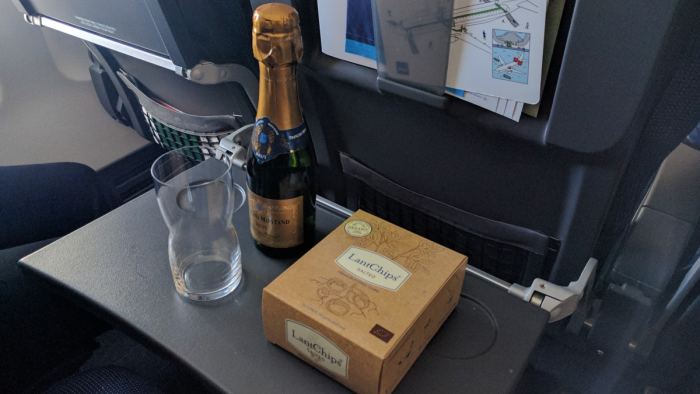 The reader here was flying from Manchester to Tromsö.

SAS Plus is SAS’ pseudo “premium economy” product. They basically sell as many rows of SAS Plus as there are takers. It is the same exact seat as the regular economy and the middle seat is NOT blocked.

The only advantages are higher luggage allowance and lounge access for those that don’t qualify based on their status and the F&B offering on-board. You do earn more miles as well with most of the airlines for these fare classes.

As the reader points out on his email, it is sometimes bit confusing what is included and what is not from the onboard menu. To my understanding, whatever is catered on the flight is available free of charge for SAS Plus passengers.

On these SAS flights I pretty much followed what other passengers were doing and ordered multiple items from the onboard menu on the first round as they did run out of some items.

You do carefully have to study the menu to see what is available on your specific flight.

This SAS Plus is not a true Business Class product and nobody should buy it as such. I am not sure how SAS sold the upgrade to the reader, however.

The price that I paid for the Barcelona to Svalbard flight with multiple stopovers was excellent. Sometimes the SAS Plus is prices at the same level as regular economy.