Last week I wrote about the opportunity to try the new Malaysia Airlines First Class on short haul routes with Business Class bookings, not knowing this would turn into our Whine Wednesday topic this week.

While Malaysia Airlines initially loaded their seatmaps in a way that allowed Business Class passengers to select seats in First, they now closed that cabin and kicked everybody back to the Business cabin.

In the typical way that Malaysia Airlines likes to communicate they unceremoniously sent an email with the title ‘Seat Change Notification’ and a random new seat assignment in the Business Cabin without any further explanation.

You can access my original article about the MAS A350 delivery and the option to try First Class here.

To remind you, this is how you were able to select the First Class seats in your booking:

Why has this been possible in the first place?

Before the new aircraft type goes on the long route to Europe (and apparently also to Auckland) the airline will first use it on some regional routes such as KL to Bangkok to train the crew in the operations and different routines required on this plane.

Lucky for me I checked my upcoming flight to Kuala Lumpur (originally today) and I was actually booked on one of these flights. Even better, I was able to select the First Class cabin with a Business Class booking.

However that’s where my luck ran out and this Email arrived three days ago: 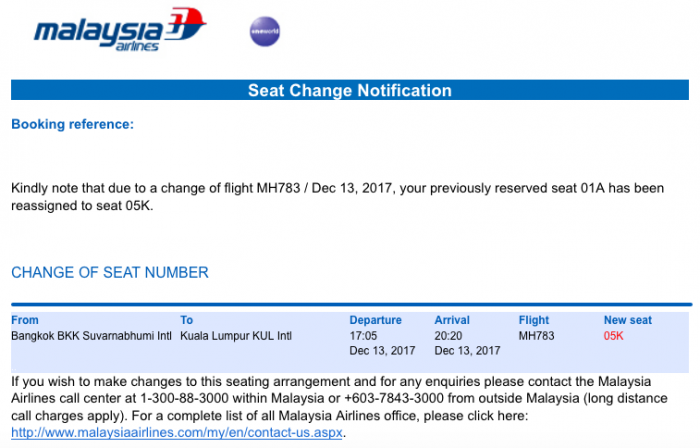 Malaysia Airlines is notorious for changing seats, cancelling flights, heavy delays and especially ZERO customer service when it comes to these interruptions. Since May I have 27 notifications from Malaysia Airlines related to such things.

Since I got sick of their antics I decided to visit the local City Ticket Office (CTO) in Bangkok located at Ploenchit Center next to the JW Marriott (previously inside the All Seasons Complex where the Conrad is). I was already in contact with that regarding my last flight to Korea because some expenses I incurred due to a messed up ticketing situation.

Asking about the situation, I was shown an internal memo that arrived yesterday at their office where Malaysia Airlines announces to their offices that ‘The First Class cabin on A350 flights is closed on all regional routes’. The station manager at Bangkok Airport would once again be not at work today so having her talk to the crew to have a look at the cabin wouldn’t be an option either.

This is how the seat map now looks for all A350 flights:

I decided to request a full refund of the ticket which after some time they did agree too begrudgingly. There is no point of my flying that route including a forced overnight in Kuala Lumpur (which I already prepaid but nevertheless it’s a nuisance). I got the refund confirmed and booked a new ticket on Korean Air tonight.

Too bad Malaysia Airlines has become so unreliable and inflexible. They were never known for good customer service if things go wrong and have proven so time and time again when baggage was lost/damaged, flights cancelled or delayed and of course with these permanent seat swaps.

Someone at Malaysia Airlines made a mistake and opened the seat map including the First Class cabin so they should own up to that and let people sit there as reserved. Of course they simply push a button and disregard that thought. I don’t need any more tier point credits this year and decided to get my money back, then book a mileage ticket with Korean Air.