This week our Whine Wednesday is about adults who let their children (and sometimes themselves) misinterpret the Club Lounge at the hotel or airport as a playground. 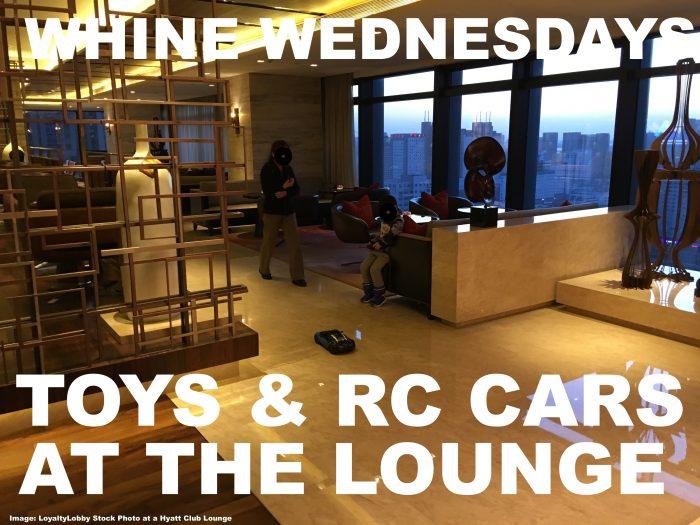 It’s not uncommon to see children and adults play with video games or watch movies/cartoons on phones and tablets with a high volume, without using headphones.

Staff often can’t be bothered to do anything against it even if the rules (especially in hotels) clearly outline some limitations such as dress code, noise level or the use of toys.

Most difficult in countries where most local guests would never follow the instructions of some staff anyway unless maybe it’s a foreigner (sad but true). China and the Middle East are two of those places that come to mind immediately.

I took above picture at an unnamed Hyatt hotel in Asia where two staff members at the club lounge stood by while a mother and her son brought of the kids RC car and let it go for a ride. Not a blink from the staff. I left the lounge anyway so no reason for me to get worked up about and stress the point but it shows the level of disregard in this area.

This type of behavior is mostly the fault of adults. How would a child know it’s not allowed to use the toys and video games at such facilities if the parents themselves are taking them there for this explicit purpose!? Are drones the next big thing to come to a lounge next to you?

Club Lounges aren’t a playground for children and not the person living room for adults either. Turn down the volume of cellphones, tablets and video games. What’s so difficult about getting some headphones or to move to a designated area such as a business center for phone calls?

Kids need something to do, if the parents are ignorant and impose their own neglect and unwillingness to spend time playing with their children on other guests who pay a premium to use the club lounge then the staff should be trained and empowered to do something about it or call a manager up to resolve the situation.