I’ve had a relatively busy hotel year in 2017 and against all odds I managed to actually re-qualify my Hyatt Globalist status with 60 nights, resulting in a free night and 4 Suite Upgrades as a bonus.

Hyatt however has changed the rules for these confirmed suite upgrade certificates and they now expire exactly 12 months after they’ve been deposited into the account.

This is problematic because not only do they expire exactly 1 year later but the new rules also say that you have to actually consume the upgrades by the time they expire and can not apply them to future reservations.

I received my first re-qualification email early November totally unexpected as I just completed 55 nights (I wrote about it here) congratulation me to a another year of Globalist which lead me to speculate that Hyatt had weakened their previously set rule that in 2017 you definitely need 60 nights to retain Globalist.

In any case I didn’t want to let a free night at Category 7 and the four Suite Upgrade certificates slide so clocking in another 5 nights in Shenyang, China last week was a no brainer to me especially since I really needed that stay to begin with.

The email referring to the 60 night Globalist re-qualification arrived two days after checkout: 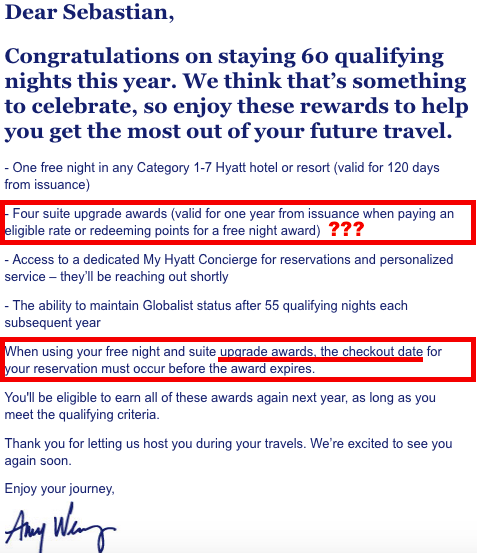 The language associated with the suite upgrades and the expiration policy worried me even though it had be discussed on social media previously.

For one it now says that the suite upgrades can be used with ‘an eligible rate or when redeeming points for a free night award’. That looks somewhat promising as previously (until now) the upgrades could only be used to confirm a revenue based (regular rate or cash&points) rate and not stays paid entirely with points.

The description and actual rule ‘valid for one year from the day of issuance’ is a nasty new regulation though. As is that even the checkout can not be later than the actual expiration date.

In other words Hyatt penalizes those Globalists who qualify early and even those who don’t (mine are now dated December 20th 2017), in my case I’m unable to use them for either my Christmas 2018, New Years Eve 2018 or Birthday (early January 2019) travel as they will all expire on December 20th 2018.

Until now the Diamond Suite Upgrade certificates have always been valid until February 28th which is the same validity of the actual elite tier membership. Previously you were allowed to apply the upgrades to future reservations as well but Hyatt has eliminated this leeway as well. At least right now you can use the upgrade until February 28th 2018.

In any case I expect the regular Tier based upgrades (unlimited suite upgrades at time of check-in for Globalists) to become a piece of cake in 2018 as so many ex Diamonds will not requalify following the drastic changes of the program.

This is a big cut for Hyatt Globalist members and I fail to see the reason behind these new restrictions. Hyatt penalizes even their highest elites while requiring them to stay a total of 60 nights annually at their hotels. That’s a lot of time and plenty of revenue.

In any case, I don’t want to start another rant how bad the program is but rather bring the attention of those readers who haven’t been made familiar with the new expiration policy to it so they can take it into account.

One way to (maybe) circumvent it is to check out of hotels and let them take the loyalty number out, then claim the stay later retroactively and have the upgrade certificates deposited late as well if it makes a big difference for the member.

World Of Hyatt Buy Points Campaign With 30% Bonus Through November 24, 2020