Our Whine Wednesday topic this week is excessive heat in hotel rooms that especially during the winter time are often being heated centrally by the hotel or bu housekeeping throughout the day. 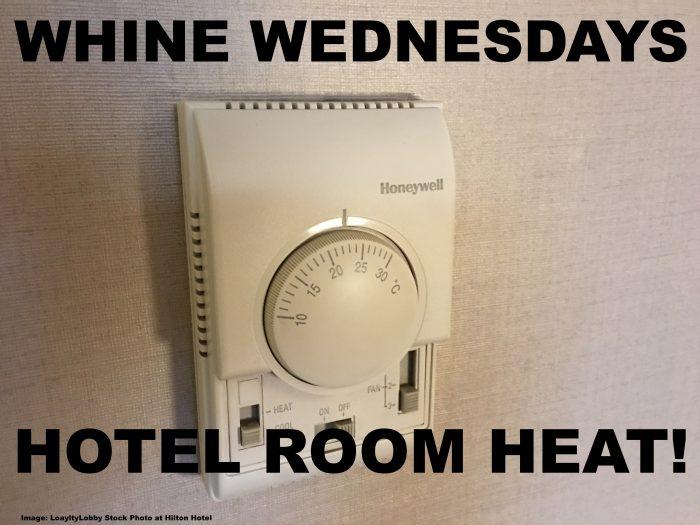 It so happened to me while staying at the Hilton Beijing earlier this week where the room temperature was 29 degrees at the time I entered the room in the evening (after housekeeping switched on the heather / Aircondition).

I usually set the temperature as cold as possible but mostly around 19 degrees centigrade which is most convenient for me to sleep (obviously everybody has a different comfort level for room temperature just like hard/soft mattresses).

When I checked in at the Hilton I usually request one of the Junior Suites on the 9th floor with a balcony door to open and let some fresh/cold air in (as much as the air in Beijing can be classified as ‘fresh’).

Unfortunately I wasn’t thinking right and put the ‘Do Not Disturb’ indicator on when i left for the afternoon and in the meanwhile housekeeping came by for turn down service. I’m sure it was just meant well but they left the heater blasting on full power until I returned around 9pm and the room was a sauna.

I then opened the door for over an hour but the walls still exhibited that much heat that it wouldn’t cool down until almost midnight.

Always make sure when you stay at a hotel (especially during winter) that the housekeeping staff knows not to mess with the room thermometer. It’s always best to use the DND sign to prevent staff from entering the room apart from main cleaning duties. After this experience I definitely start to use the post it’s again and attach them to the A/C control.

There are also hotels where you can’t even regulate very much because they have one central A/C and it blows only hot air during winter. I had discussions about this with hotels many times in the past and they often claim they aren’t allowed to have hot/cold run at the same time for safety reasons.

Whine Wednesdays: Ridiculous Second Person Charges ($200 If Person Not With You When Checking In)