Citizens of 19 countries including China, India, Saudi Arabia and Taiwan ROC are required to get a visa prior to visiting Thailand but can do so through the Visa on Arrival (VOA) facility.

The Bangkok Post (access here) reported that long lineups at Visa on Arrival counters in Bangkok are very likely during the new year travel period that is starting this weekend.

Tourists applying for a visa on arrival at Suvarnabhumi airport are likely to face up to a four-hour wait during the New Year period due to a tough screening process to catch undesirables trying to enter the Kingdom.

Pol Col Cherngron Rimpadee, deputy immigration police spokesman, asked Tuesday for understanding saying the procedures are necessary to deal with criminals that take advantage of the hectic period to enter the country by disguising themselves as tourists. …

Ideally, the process should take three minutes to complete but sudden influxes of applicants can lead to long queues.

I fail to see any reason why the annually repeating large number of arrivals in Thailand during peak holiday seasons can be described as a ‘sudden influx of applicants’ because everybody knows about this well in advance and if proper staffing would be taken serious then it wouldn’t even be necessary to make such announcements.

Bangkok’s airports already faced staffing issues for regular arrivals on multiple occasions this year (see our article from June) that were clearly a result of neglect and not a sudden surge of unexpected arrivals.

The currently announced 4 hour wait time applies only to Visa on Arrival visitors!

Even though it wouldn’t surprise me if the regular line is complete mayhem as well.

The Visa on Arrival can be applied for directly at the respective counter at Thai Airports with international arrivals: 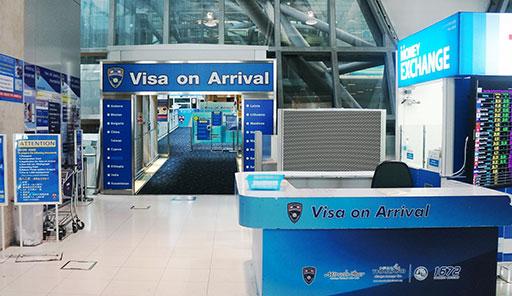 The process is outlined here:

The following countries are eligible to apply for visa on arrival:

Especially citizens of China, India, Saudi Arabia and Taiwan are those who will have to endure long wait times as Thailand is popular as a tourist destination for those visitors.

The Visa on Arrival is just a convenience option. Each traveler has the choice of applying for a standard visa at the Thai Embassy in their home country and avoid having to go through the visa on arrival process. I’d always recommend that option if you’re living in a city where a Thai embassy or consulate is available.

Passengers who arrive in Bangkok in Business or First Class will usually receive a Premium Lane pass in order to use the Express Lane for arrivals (immigration processing). This won’t help you though if you require a visa first.

The immigration at Bangkok Airport has problems during peak hours, high season and pretty much any irregular arrival wave which can also be cause by early or late arrivals. Their staffing is often inadequate for being the largest airport in the country with large numbers of arrivals.

Getting the visa ahead of time often saves headache and given the 2000 THB Visa Fee it’s usually the same or cheaper at home. Hopefully it won’t be as bad as advised by the officials because nothing says ‘Hello and Welcome’ as much as a multi hour wait for immigration formalities to start your holiday or business trip.