This weeks Fabulous Friday is about well orchestrated and properly functioning Skyteam Elite Plus benefits, commonly known as SkyPriority (Priority Baggage/Check In). 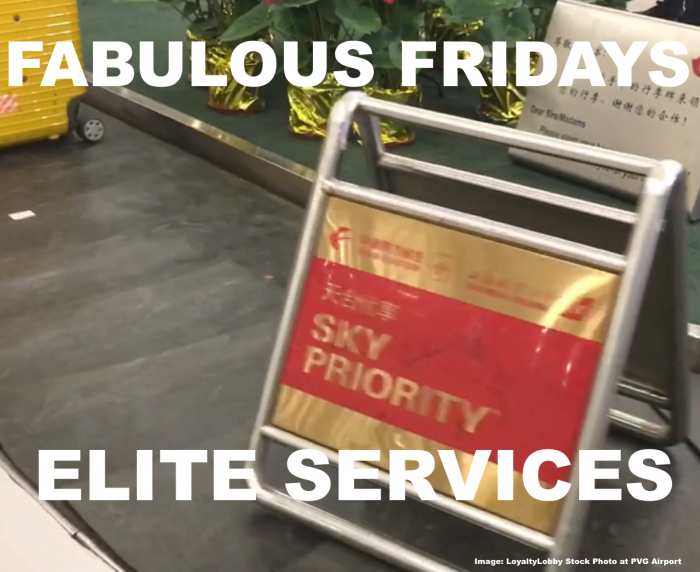 Priority services based on class of service or elite tier status is often a hit and miss situation as the consistency how (and if) these services are provided vary greatly based on airline and airport.

It’s always a pleasant surprise when an airline actually provides proper service as advertised or even exceeds expectations.

There are more (such as Upgrades) but those vary from airline to airline and are not really relevant in overall comparison as I was trying to mention the key benefits only that are provided for most airlines elites.

The other day I booked a simple domestic flight with China Eastern Airlines, operated by an Airbus A330 from Beijing to Shanghai-Pudong. Even though China Eastern doesn’t have the best reputation overall I chose it because I really don’t like the massive Terminal 3 in Beijing with endless ways and constant bus boarding.

I’m currently having Delta Airlines Platinum Medallion as well as China Eastern Explorer Silver from the SPG partnership. Unfortunately if you have a standalone domestic ticket with any SkyTeam airline even Elite Plus (their highest universal tier) won’t get you lounge access. China Eastern does however provide Business Class Lounge access to their own Silver members which is equivalent to just the lower SkyTeam Elite tier.

The priority check-in area in Beijing’s older Terminal 2 was properly staffed (each counter in operation) and assistance with the heavy baggage was promptly offered. The agent knew the rules about lounge access well and offered to switch the numbers so I can use the China Eastern Lounge. I guess you could always swap them back after the lounge visit but I really don’t care more/less for either of the two programs. The bag was then transported by a porter to a regular drop off counter in the check-in hall. The security channel was only available for booked First/Business Class but it was a quiet day so no loss there.

I then went on to visit the China Eastern Business Class Lounge (didn’t expect much of it):

The lounge was surprisingly nice inside. Not spectacular but I’ve seen much worse and the items offered for breakfast as well as the beverages provided were in line with the usual lounge standard. Can’t say anything negative about it.

Upon arrival in Shanghai Pudong my bag was the first on the belt and the baggage delivery was overall very expedient. No damages on the bag either.

I’ve had all sorts of experiences with the benefits for Star Alliance Gold, oneWorld Emerald/Sapphire and especially SkyTeam Elite/Elite Plus being provided in a lackluster manner and I haven’t had high expectations for China Eastern. However since Air China isn’t much better (rather the opposite) in their domestic services I chose to go for the more convenient Terminal this time which turned out to be a good decision.

What is your experience with receiving your airline elite benefits?