The last Compensation Clinic of this year is about the Doubletree Hotel in Shanghai-Pudong where I used a Be My Guest Certificate which I received from Hilton Customer Relations for an incident at the same property a year ago. 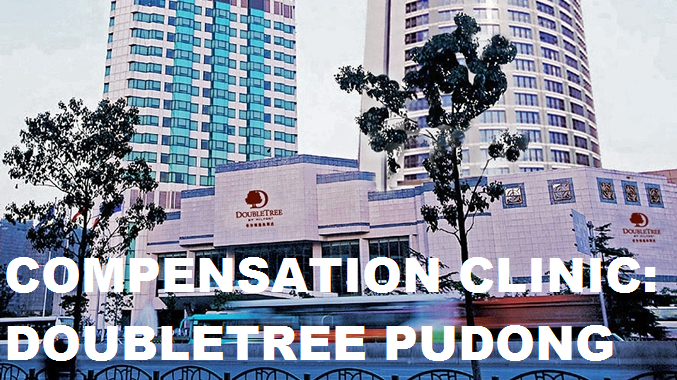 Remember that you can always email me, send us a Facebook message or Tweet me about the issues you have with hotels, airlines and other travel providers. We will feature one new case each week.

When I stayed at the Doubletree Pudong exactly a year ago (same dates actually) there were many things that went wrong and the hotel management wasn’t really responsive so I opened up a case with Hilton Guest Relations who ended up sending me a Be My Guest Certificate for a complimentary stay at any Doubletree worldwide.

Hilton used to issue universal certificates but has now resorted to tying them to the brand where the original issue occurred. When I received the certificate I noticed that it now bears the notice ‘Not Valid New Year’s Eve’ which I attribute to the fact that it was a more or less well known secret that one of the best values of using these vouchers has been the Doubletree New York City Times Square During NYE.

Apart from that I really had zero use for the certificate during the entire year it was in my possession. There were simply no Doubletree Hotels in any of the cities where I went (coming to think of it I could have stayed at the DT Santa Monica, oh well).

In any case the certificate would expire in 2 months from now and given my lack of success in using it during the entire year I thought it’s the best to just use it here in Shanghai again even though it doesn’t make much sense in terms of the economics of it. A night at the Doubletree Pudong is roughly US$100, not exactly the best value but better than letting it expire.

You just need to make any regular reservation for a Standard room (can do it online) and then hand over the certificate upon check-in. I usually enter in the comment field ‘Stay Charges Paid Via BMG Certificate’ just in case. Not that it makes any difference.

After a bit of trouble at the hotel because they weren’t used to handle such certificates (no surprise there, who would usually use the voucher at this place?) things were taken care of and next morning I was handed a bill without room charges.

I had a snack item on the minibar which I charged to the room in order to ‘ping’ the Hilton Honors account and see if it posts as a stay and also triggers the Diamond Amenity bonus of 1000 points. It’s also a good way to use up the credit card authorization taken prior. Just charge the cheapest mini bar item or something from the bar, restaurant or room service.

The charges for these certificate stays are actually being debited back to the offending property that initially caused the problem with the guest. They obviously won’t be too happy to receive a $1000+ charge for an extremely expensive stay after you had a $80 stay at their own property. In this case it’s a wash for the Doubletree Pudong. I got the certificate from them and used it there as well. Left hand, right hand.

Compensation Clinic: Too Many Service Cutbacks At The Hyatt Regency Seattle – Full Refund!