Air travelers didn’t face any deadly passenger jet crashes in 2017 and the year was exceptionally safe according to two separate reports released by to70 (access here) and ASN (access here).

ASN’s data shows 10 fatal accidents in 2017 of which five were cargo plane related and rest non-jet smaller planes all killing total of 44 passengers (and 35 on the ground).

Here’s an excerpt from ASN:

Over the year 2017 the Aviation Safety Network recorded a total of 10 fatal airliner accidents [1], resulting in 44 occupant fatalities and 35 persons on the ground. This makes 2017 the safest year ever, both by the number of fatal accidents as well as in terms of fatalities. In 2016 ASN recorded 16 accidents and 303 lives lost.

Here’s an excerpt from to70:

Our to70 Civil Aviation Safety Review examines accidents only to larger passenger aircraft commonly used by most travellers. (See our criteria in the Note below.) We include all causes, whether technical failure, human error or unlawful interference. In 2016, there were 71 civil aviation accidents of which six resulted in fatalities. This year, 2017, the number is even lower; 111 accidents, two of which included fatalities. There were no accidents in 2017 related to unlawful interference. A total of 13 lives lost in two regional airline accidents:

Despite the good news, a note of caution needs to be sounded. Whilst the safety levels of modern civil passenger airplanes remain high, the extraordinarily low accident rate this year must be seen as a case of good fortune. Statistically speaking, in a dataset that starts with over thirty million flights, there is little difference between two accidents and ten accidents. That this year’s accidents only resulted in 13 fatalities is even greater fortune. 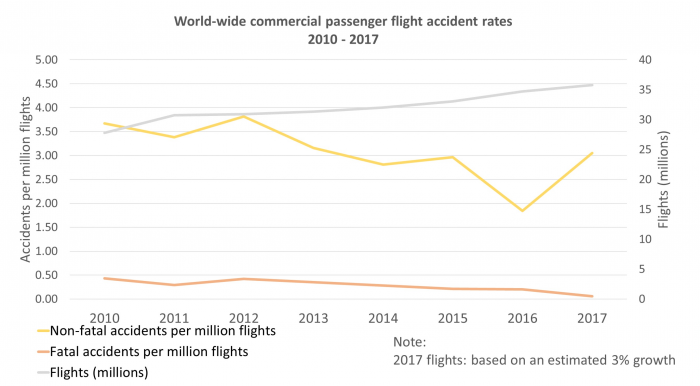 Air travel is very safe form of transportation when one considers how many people are killed every year on the road in car and motorcycle related accidents.

As both reports pointed out, 2017 was very good year considering that there were no commercial jet crashes that one could almost consider an anomaly when the traffic keeps growing at roughly 3% year on year.