Last week John wrote about Hyatt’s announcement that effective January 1st 2018 Free Night Awards booked under the World of Hyatt program now count as eligible nights and we can confirm that they indeed post correctly. 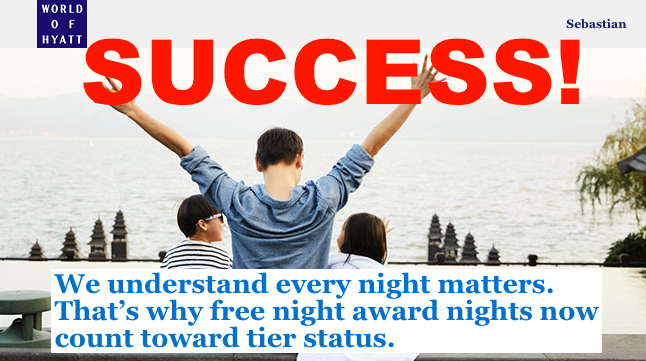 Previously awards booked wholly with points or award certificates did not count towards status qualification, setting Hyatt apart from their competitors which all accept award nights for qualification requirement.

It has always been a nuisance with Hyatt that they wouldn’t accept award nights as qualifying for status even though the competition has done so for ages. Hyatt then found a compromise two years ago, accepting at least cash&points stays for qualification and also awarding points credit for the revenue portion of the stay (something the other chains don’t do).

With the most recent announcement (see John’s article about it here) Hyatt now allows their members who redeem their points entirely (not just cash&points) or also award certificates originating from various promotions or the Hyatt Credit Card signup to count towards status qualification in the 2018 calendar year.

I’ve still had two such reservations (from the Hyatt Credit Card) and was not sure if they would post without a hiccup but I was positively surprised after checking out at the Park Hyatt Tokyo the other day and the stay appeared properly as qualifying on my account:

So to clear up some questions we received, Hyatt Free Nights do post properly and qualifying:

What I should have done in retrospect is to post something like a drink of dinner to the room account rather than paying cash or with credit card to have a definite points postings but it appears that it works just fine even without incidental charges.

Interestingly (if you ever are in this situation) I wanted to redeem an award for the Park Hyatt Seoul and was roughly 1000 points short for that so instead of buying them on the Hyatt website I decided to have dinner at the New York Grill at PH Tokyo and pay per credit card, giving my World of Hyatt number for F&B related points accrual. These points post instantly upon payment rather than a few days after check-out which made it possible for me to book the award for Seoul right away.

It’s a great step that Hyatt now made this option available and members are able to earn qualifying nights easier. This might have in part to do with how difficult it has become to obtain Hyatt status overall (especially Globalist) and by this members can at least soften the blow a little bit by using their points to earn a few extra nights.

Ever since Cash&Points was introduced I’ve been using those awards almost entirely given the good value. The only problem is that availability is often scarce as it’s not available in the same way as regular awards are. Hotels aren’t required to open up cash&points inventory even though standard rooms are available unlike full awards paid entirely by points.