A British Airways First Officer scheduled to pilot a flight to Mauritius showed up for work intoxicated and had his cabin crew co-workers call the police on him who subsequently arrested the pilot. 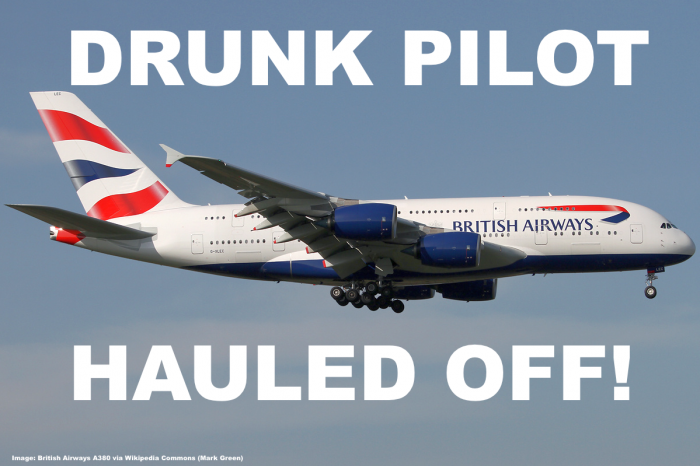 The first officer was taken into custody right off the cockpit, handcuffed and led out of the plane while passengers were already on board and able to witness the scene.

The situation came about because the cabin crew suspected the First Officer was drunk as he smelled noticeably of liquor, resulting in a call to the airport police and the pilot ending up in custody.

You can read more about it from The Daily Mail (access here).

A British Airways pilot has been hauled from a packed flight by armed police seconds from take-off after his cabin crew suspected he was drunk.

Staff on the 300-passenger flight who thought they could smell alcohol on him and feared for the safety of those on board called 999.

The first officer on the Boeing 777 flight 2063 to the Indian Ocean island of Mauritius, which takes 11 hours, was arrested and led away. … Sussex Police told the Sun they had been called at 8.25pm to the airport’s South Terminal Gate 17 and confirmed a 49-year-old man, from Harmondsworth, West London, remained in custody yesterday. …

The flight was due to leave Gatwick Airport at 8.20pm on Thursday but was delayed until 10.56pm when a replacement pilot was found. It landed in Mauritius at 2.07pm local time yesterday.

BA managed to get a replacement pilot timely enough to avoid a heavy delay which could have resulted in the company being on the hook for EC261 compensation for each passenger on board.

My concern however isn’t just the delay but rather that it was the cabin crew who called upon the police to take the first officer off the flight. In the meanwhile he already spent an extended amount of time with the captain of the flight for pre-flight briefing, aircraft check and in regular conversation. Why didn’t the Captain notice anything or better said, why didn’t he do his job and kick the first officer off the flight?

There is no way that someone reeks of alcohol to the point that the cabin crew notices it yet the captain who sits directly next to the guy in the cockpit doesn’t detect anything.

This is very bad. Maybe the First Officer has a substance abuse problem or simply got wasted and didn’t sleep it off but regardless of that I feel the real lapse here is on the side of the Captain. He should have taken the F/O off this flight or in the very least advised him to ‘call in sick’ if he doesn’t want to write him off.

Pilots usually cover for each other when a small mishap occurs but this is serious so there isn’t any leeway for letting a drunk colleague slide through the cracks and turn a blind eye.